The Employee Tech Experience: The Chasm Between Personal and Professional Tools Grows


Five to six years ago, one of the big conversations you heard a lot about was around how many companies were blocking Facebook at work.

And then, companies got smarter (well, most companies, at least), and they started opening up social media usage at work.

But, technology at work is still a challenge.

And, I might argue, based on what I’ve seen and heard recently, it’s a bigger challenge than any of us probably want to admit.

Because corporate IT departments are still making it very tough for marketing folks to do their jobs well.

What am I talking about?

For example, on a personal level, people are using tools like:

Meanwhile, when some people go to work, they’re using tools like Lotus Notes. Yeah, I wish I were kidding.

Many corporate employees are being told tools like Google Docs are off limits.

That they can’t use Dropbox–find another way.

That Gmail, of all things, cannot be used at work.

And, that they’d prefer if they used the corporate intranet instead of tools like Slack (which is picking up all kinds of momentum lately; note: We started using this on the MIMA board a few months ago–great tool).

Why is this a big deal?

Because employees work with all sort of tools in their personal lives that are efficient and useful.

Then, they go to work and they are sometimes forced to play by an entirely different set of rules.

I know companies have security concerns. I know there are other technical challenges. But, the bottom line is that this puts a ton of egg on the face of companies that are instituting and implementing these dated policies.

It’s relatively fine for now. But, as Millennials mature (who generally are more tech-adept than their Gen Y and X colleagues), they’re going to expect more from employers. I’m sure they already expect more.

And this is definitely impacting the employee experience–you don’t think this is affecting the way people think about certain companies and organizations? You don’t think that has a lasting impact on recruiting and retention?

I’m sure companies will come around. I know it’ll take time (just like social did). But, for now, I know it’s also frustrating for a lot of big corporate employees.

What do you think–especially my corporate friends? Is this as big of a problem as I’m painting it to be? 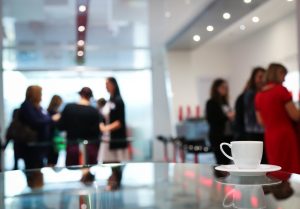