If you want to displace negative content or build a strong brand identity, Twitter can help, says Contributor Chris Silver Smith. Here are 10 ways to use tweets to dominate page one on Google. 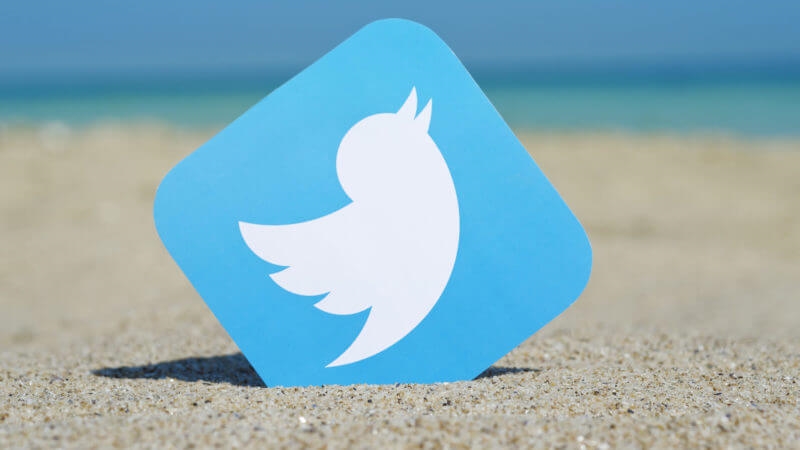 Are you jealous of the big brands whose tweets appear in a cool carousel below their Twitter accounts on page one of Google’s search results?

When you’re trying to occupy a lot of space for your name in the search results as a way to combat negative reviews or content that may not be flattering, Twitter can provide a quick increase in the real estate you control on page one.

Would you like to dominate and command the same exposure? Read on, because Google-featured tweets are within your grasp.

Beating back a bad rep

Whether you are working to try to displace negative content or trying to better engineer your online brand identity and proactively manage your reputation, Twitter is one of the most powerful tools at your disposal.

In research I conducted last year, I found 30 out of the top 50 brand names worldwide have their Twitter account pages showing up on page one for their name searches in Google. (If we narrowed to the top 50 US brand names, I would bet the percentage would be much higher.)

This is a good thing for companies and individuals alike. When you control what’s on page one in Google, that’s one less place where negativity can appear.

It is also good from the standpoint of providing a customer service tool as well as a brand-building and promotional tool. Statista reports Twitter has 33.2 percent penetration in the US market here in 2018, and the audience size in that channel is only set to increase. 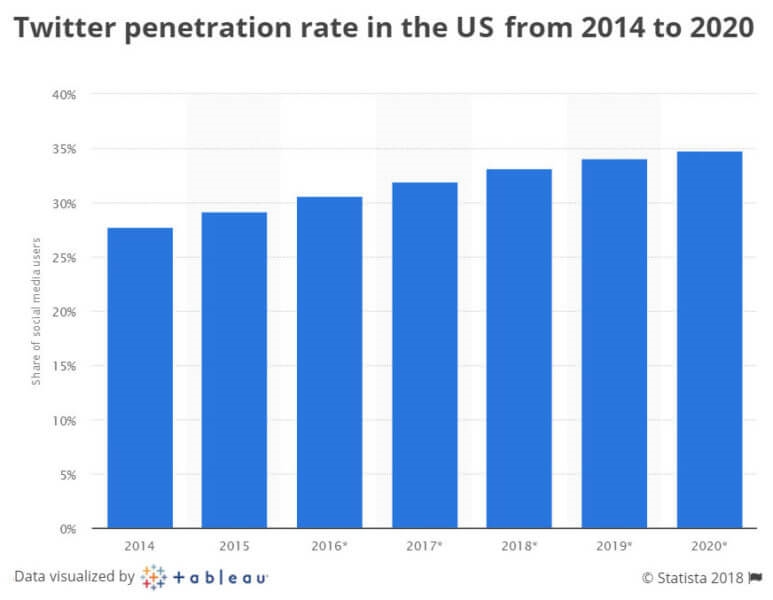 Statista projects that penetration will continue to increase to 34.1 percent in 2019 and 34.8 percent in 2020. Considering how many culturally significant events are happening on Twitter (including how it is the preferred communication platform for certain politicians), Statista’s projections might even be conservatively low.

A carousel of tweets can be pretty attention-grabbing and takes up a significant amount of vertical space on the results page. Some companies, like Whole Foods and ThinkGeek, enjoy having their name searches invoke the featured tweet carousel frequently:

But make no mistake — the tweet carousel is not solely the province of larger, super-popular companies. Smaller businesses, like the Kogi Korean BBQ of Los Angeles, is an example of a small company that achieves this treatment:

And individuals can achieve this as well. Here are examples from Chris Anderson, author and former editor-in-chief at WIRED magazine and Martha Wells, science fiction/fantasy author and Hugo Award nominee: 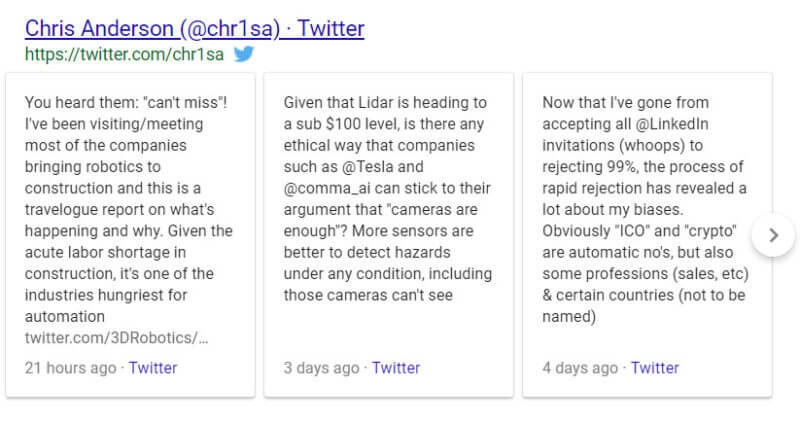 You don’t have to be a famous author or editor to command a tweet carousel: 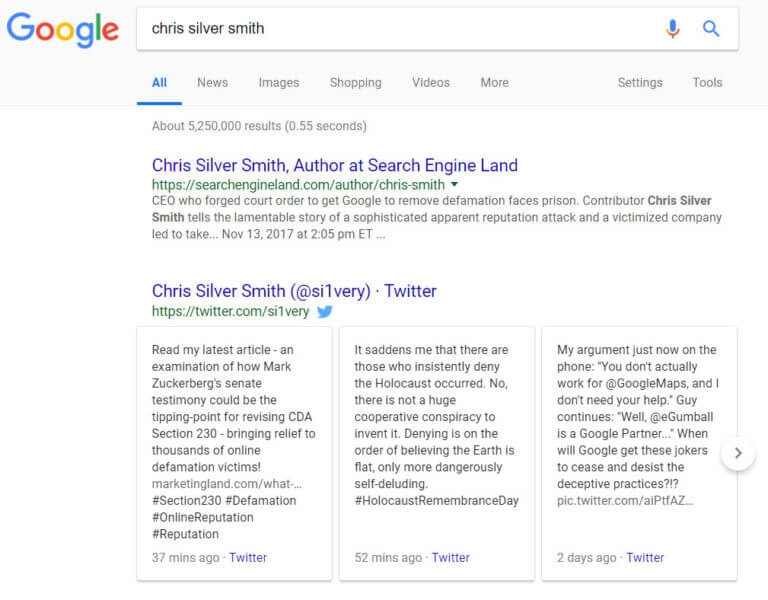 How to get a carousel of your own

The primary secret is this: You need to tweet frequently, and you need to regularly have other Twitter users interact with your tweets.

Of course, there are some techniques that can help. Here are 10 easy tips to help get your tweets showing on Google.

1. Develop at least a few hundred followers. I know I said that the number of followers is not a key criterion for getting a carousel, but you do need interactions with your tweets, and if you have no followers, it will be harder to gain any interactions. You can develop followers by following accounts that tweet about things you are interested in, return-following others who follow you and interacting with others’ tweets. This is a time commitment, of course, but it’s worthwhile.

2. Tweet frequently. I mentioned this is one of the key factors, and I cannot emphasize it enough. You cannot merely tweet in a huge burst and then go days and months without tweeting again. The carousel of tweets has a recency component in the algorithm, so if you achieve the carousel but stop tweeting for a while, it will go away again. You will want to tweet a few times a day, typically within business hours, when others are more likely to see and interact with your tweets.

3. Increase your engagement. This means you need others to sometimes interact with your account’s tweets. You cannot have this if you only tweet out self-referential content, like sales announcements or things about yourself and your company. You will need to adopt the practice of tweeting things of interest to your audience, replying to things others have tweeted and acknowledging and incorporating some of the top most interesting things happening beyond you. Engagement means interaction. It does not mean you sit at a distance from your audience and merely send out announcements and links to your blog.

5. Tweet what works. Notice what works for your Twitter audience, and adapt to posting the things that gain more likes, retweets (RT) and replies. Humorous stuff can often do this, but sometimes also taking a stance on a controversial topic might also attract interactions. I once accidentally targeted people who would hate a particular tweet I promoted through Twitter ads, and it got many more replies as a result. You can ask people to RT or “like” a tweet, but I would do it infrequently. Asking people to interact can come across as overly self-serving and will be a turnoff to your audience.

6. Use popular hashtags and tweet about popular events. Engaging with people who are passionate about particular topics can be a fast-track to getting tweet interactions. Look for the most popular hashtags that Twitter is showing for any day, and see if you have something to say about the topic. Conferences, concerts, sports games and other events often have custom hashtags for those discussing things happening, and if you are involved with one of those events, you can rapidly get interactions with others posting on the same hashtags.

8. Incorporate emojis. ???  While some social media leaders have been dubious about adding “clutter” to tweets or “spamming them up,” if used judiciously, emojis can enhance the users’ experience, help draw eyes to your tweets and increase engagement. Twitter’s official blog has recommended including emojis to increase engagement.

9. Tweet humorous riffs involving other Twitter accounts or current events. A fast-track way of getting a lot of likes and RTs is to tweet something humorous that plays off another Twitter account or a popular event. This can be cooperative, or it could be contrary. One example was when the lights went out in the SuperBowl in 2013, and the Oreo cookie account posted a cute graphic with the statement “You can still dunk in the dark.” 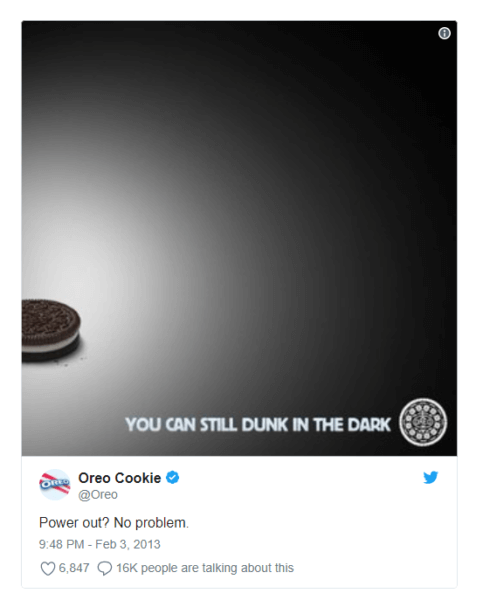 Another classic example is when Old Spice and Taco Bell were both snarky with each other: 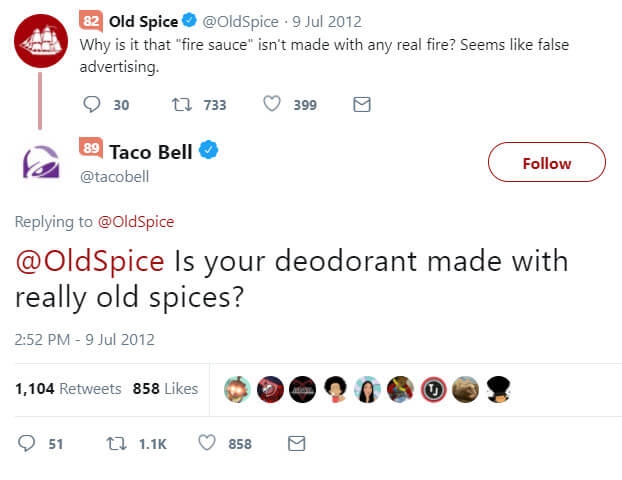 Of course, humor is not for all brands, necessarily, and most companies cannot do it right. So, one should proceed very carefully. If you are not highly familiar with the social media universe, you should absolutely not attempt it, or else you could create a major reputation problem for yourself. But when you know what you are doing, and you can gauge the effect of your humor, it can be effective at gaining a mass of interactions rapidly.

10. Tweet consistently. I already emphasized the need to tweet frequently, but there seems to also be a beneficial effect for attaining the Twitter carousel through tweeting consistently. You should try to tweet daily, and tweet a few times per day. If your audience is mostly business folks, then you need to post tweets primarily on weekdays. You can schedule tweets in advance through various management tools, so this does not mean that you need to be omnipresent on Twitter. But you may find that if you load the app on your phone, it is easy enough to pause at various moments throughout your day and engage just a bit on Twitter.

If you’re finding it difficult to invoke the tweet carousel in Google search engine results pages (SERPs), there is also the option of getting an individual tweet to rank in Google. Doing this is actually fairly simple.

You may have noticed that Google is not really indexing all tweets being made. While representatives from Google have famously stated they do not use specific social media signals, they do use various forms of links.

Some types of activities on Twitter, such as likes and RTs, can result in links being formed to an individual tweet page under certain circumstances. Obviously, these types of links are undependable unless you achieve a large quantity of RTs and likes for the tweet.

However, regular links to the tweet’s page are far more dependable and helpful in getting the page indexed. Embedding a tweet creates an iframe with embed code that Google counts as a type of link, and you can develop links and embeds to tweets by including them in blog posts or webpages.

As an example, I have posted over 12,000 tweets, but I only have a few dozen tweets indexed in Google. Last year, one of my tweets that was indexed pointed out how gas stations in the Dallas area were experiencing a run on gas due to shortage fears following Hurricane Harvey: 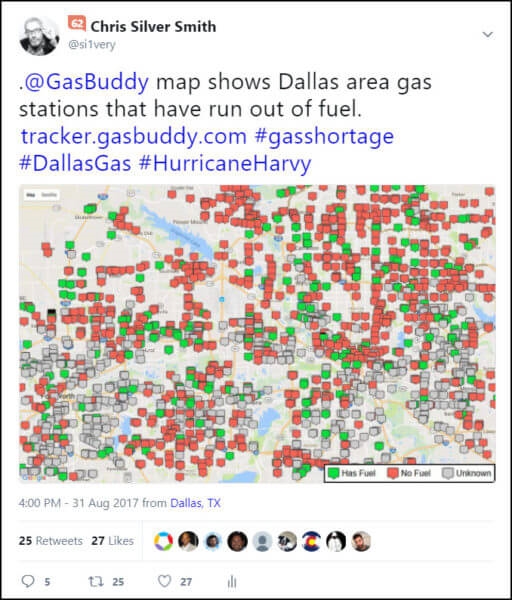 CNN ended up using my tweet in a printed story which is probably why Google indexed this tweet.

It isn’t hard to obtain the Twitter carousel in Google search results, but it will take some effort to maintain it, and I think it’s worthwhile to do it.

Tweet carousels give you a large spot on the search results page to represent yourself and establish a credible, respectable and impressive identity. For many companies and individuals, this can be a useful tool in your primary set of online brand-building and identity materials.

Chris Smith is President of Argent Media, and serves on advisory boards for Universal Business Listing and FindLaw. Follow him @si1very on Twitter and see more of his writing on reputation management on Search Engine Land. 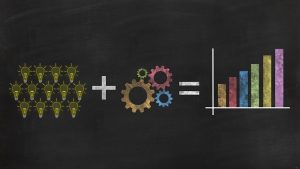 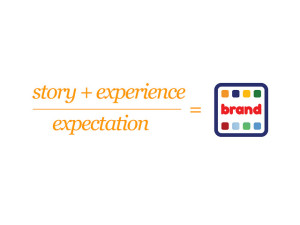