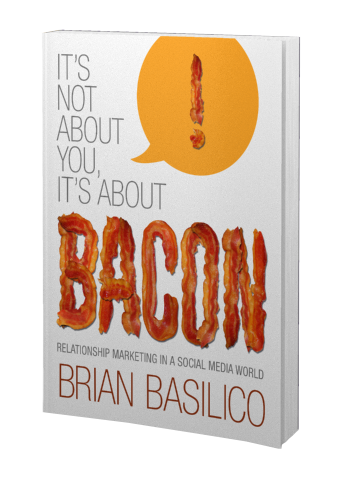 I had someone contact me after reading my first book. It’s called, “It’s Not About You, It’s About Bacon“, but the main concept is “Relationship Marketing in a Social Media World!“. He commented back and said, “You want me to do more networking?” The answer I gave him was “Yes.” He was thinking I meant face-to-face networking. In the middle of a pandemic, that is a little more challenging. But, that’s not the point of the book. The point of the book is how to do face-to-face type networking in a social media world. He was missing the main point!

The biggest difference in relationship marketing is that it’s more about creating one-on-one conversations online. When we’re networking live in a group, it’s different. People are reading your facial expressions, body language, and more. They may even interpret what you say differently, but the bottom line is you’re communicating with a larger group of people.

With online, it’s more one-on-one even with Zoom meetings. You could be in a Zoom meeting where you have everybody spread out like the Brady Bunch on the screen, but people can only pay attention to one square at a time.

Recently, I’ve been doing a lot more one-on-one Zoom meetings where it’s just me communicating with another person. The core of relationship marketing online is building and maintaining one-on-one relationships.

Social media is more about posting things to get people’s attention. The key to effective social networking is engagement. When you create a post, you hope somebody likes, comments, or even shares it. The question is, once they engage are you continuing the conversation? Are you commenting on their comments? Are you creating direct messages with some of those people? Can you find an interesting article, a company, or a connection to share? Can you send a message to somebody and say, “Hey, do you know this person or this company?” Or “Have you read this article?” That’s where one-on-one networking, social media, and social networking merge into a cohesive system.

I want to introduce you to two different concepts. These are H2h and Ror. H2h stands for human-to-human contact. Ror stands for return-on-relationship. Let’s break these two down further. 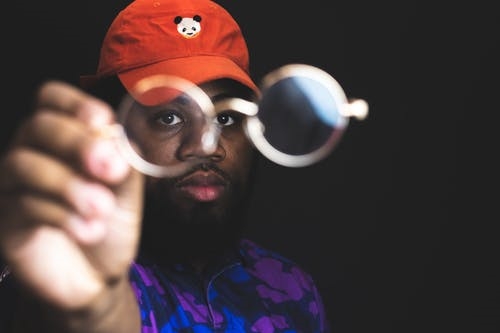 If you were to search H2h right now, or human to human, you would find a lot of news or articles about transmitting a virus, or human to human transfer. Essentially, that’s a good metaphor for what we’re doing in the H2h space. What you are trying to do is create viral information that is part of that one-to-one transmission. While researching this, I found an article on Google that said that 2018 will be “The year of human-to-human marketing”, or H2h. Well, it’s not a recent phenomenon, it’s been that way forever. Think about other things that you do to create engagement with people? Tell a joke, a story, or ask them a question? Those are some of the techniques that we may use to engage face-to-face.

An example of this is where I used a new feature on LinkedIn that allows you to create a poll in a post. In one poll that I recently created, I asked the question, “What is your least favorite phrase?” Especially ones that are being thrown around about the current business environment. The four choices were: “The New Normal”, “Pivot”, “Reinvention”, and “In This Together”. Of course, people would be able to vote on those four. That’s one of the challenges since LinkedIn limits you to only four options. 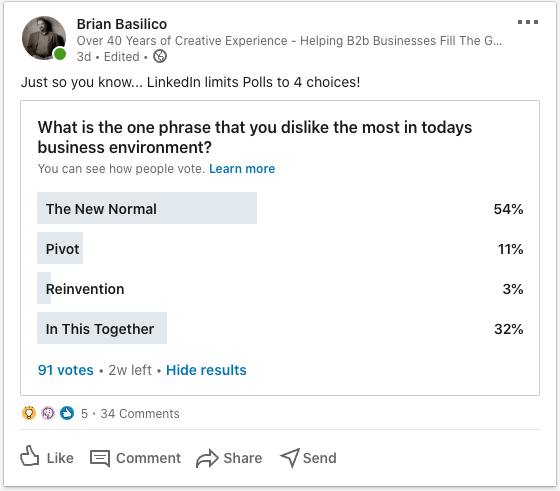 What happened was people were saying, “Well, they’re all bad, but you know what? There are some other ones I think you should have added. I think you should have added Up-Leveling or Uncertain Times or Unprecedented Times, or another favorite, Stay Safe.” People had other ones that they wanted to add, so we created conversations around this. That question definitely stirred emotion, votes are still coming in, and a lot of comments. That was more than just a way to create engagement, it gave me the opportunity to communicate directly with people who are worthy of continuing to build relationships with.

If you don’t follow me on LinkedIn, you should, but I’m sure you’re curious about which one’s winning. Right now, the one with the most votes is, “The new normal.” People hate it. That’s okay with me. The point was to generate the conversation, not to bash your favorite or most hated phrase. The goal of your content should be to create that one-on-one, human-to-human relationship and conversations. 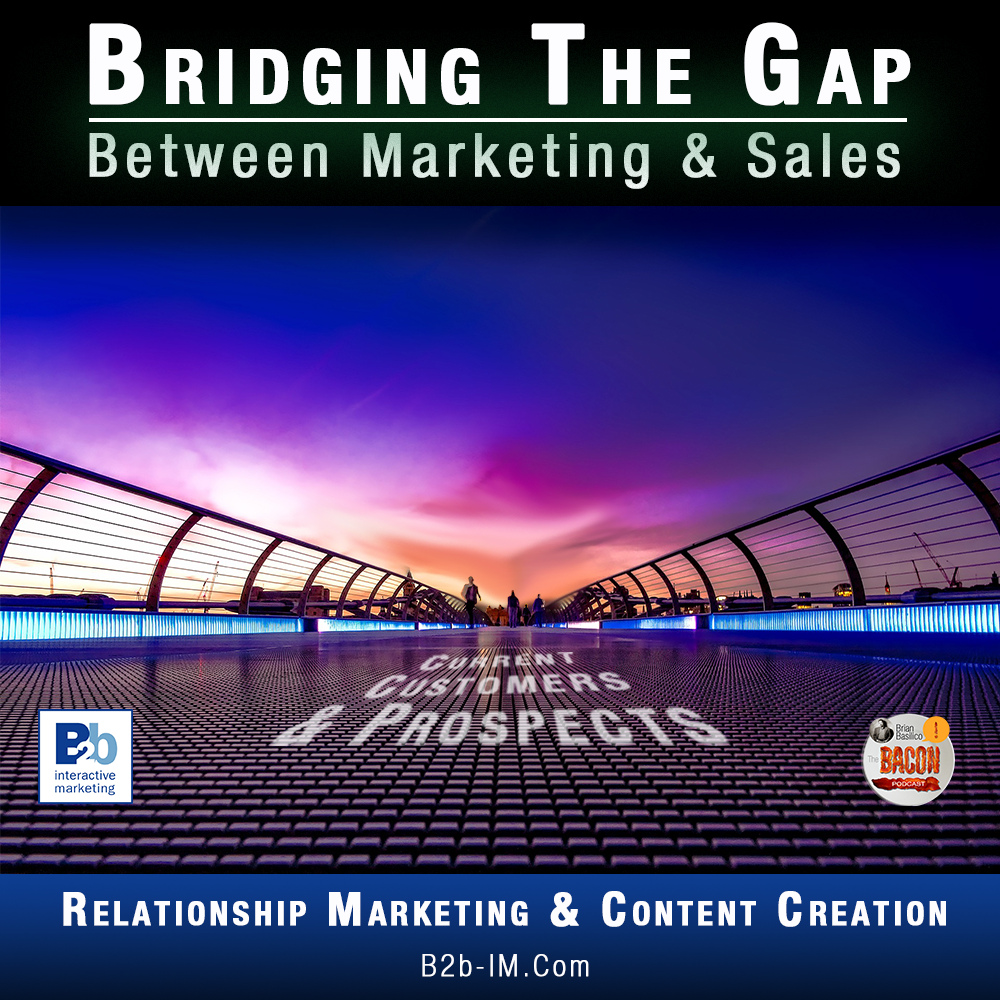 A return on relationship is the long term value that you create by nurturing those conversations. For instance, people are always searching for an easy way to create a direct connection between social media marketing and sales. They just want to go in, meet somebody and boom, sell them something. Especially in the B2b space, it takes time. It can take upwards of two, three years to get somebody to go from knowing you, to trusting you enough to purchase what you have.

There’s a lot of ways to measure that Ror. What about getting testimonials or recommendations on LinkedIn or Google? Maybe after time, people might refer you to somebody. They may become your advocate. There are certain things that I post on LinkedIn, like my Baconisms, that people constantly share.

I love it when they do that because they like what I am saying and want to share it with their audience. They’re advocating for the content that I’m creating. I posted the other day about the Pu Pu Platter (my last blog and podcast). Somebody sent me a LinkedIn message that said, “Hey, I love your stuff so much. I want to interview you.” Now, I’m building on that relationship.

The other thing you can find from engagement and Ror is education. You may have conversations where you can learn from those people. You can also create an opportunity to put information in front of some people and listen to them and their points of view. I call this crowd-sourcing. 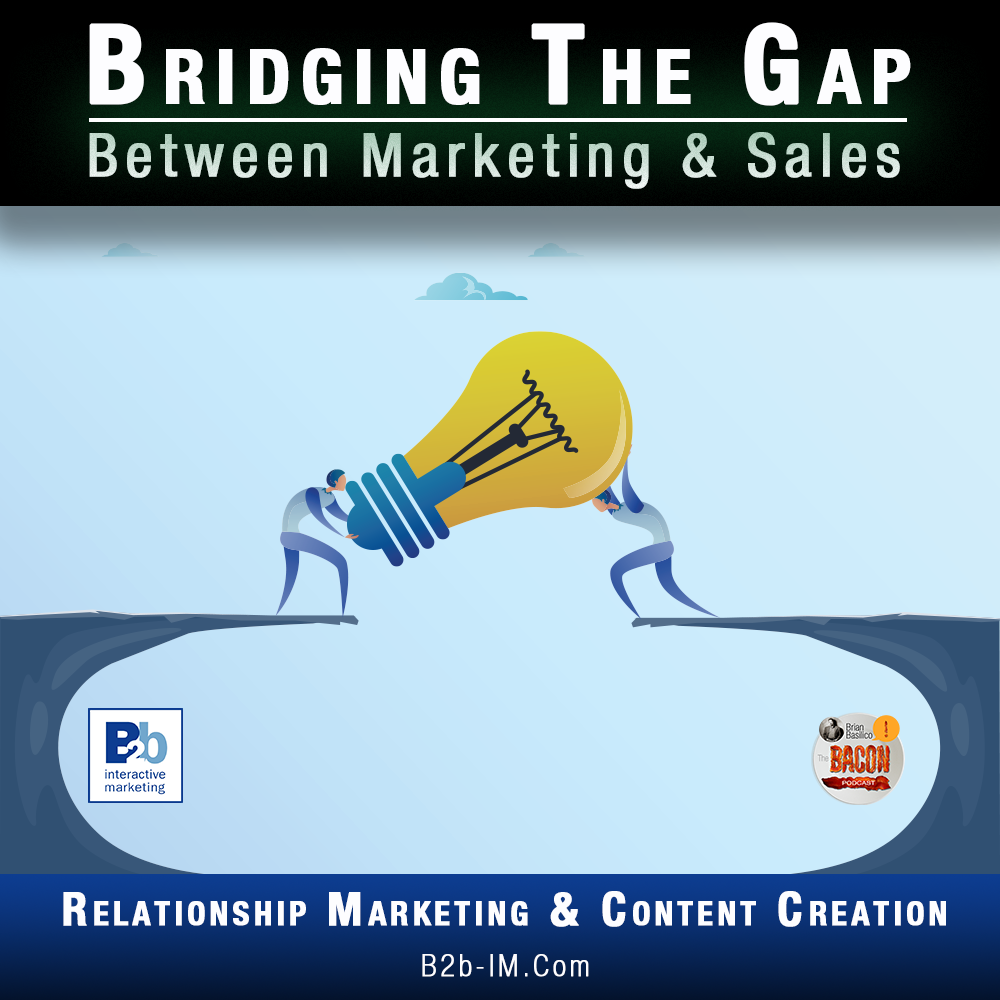 For instance, I did it with my book. I’d put up my covers and I kept asking people, “Do you like Version A, Version B, or Version C?” I gave them three choices and they voted on it. After that, I was able to crowd-source the final design concept.

Then, I did the same thing with posts on LinkedIn and Facebook. I created two different images with the exact same text. I was trying to create feedback on something I actually learned from a conversation on LinkedIn. Someone said to me, “Your true strength and value you provide your customers is that you help bridge the gap between marketing and sales”.

I created a teaser image with a 3D Star Wars looking bridge and the other one had a drawing with a gap in between two plateaus and the image of putting a light bulb across to bridge them. On Facebook, everybody was voting for the cartoony looking one. When I put them on LinkedIn, the one that got the most comments, the most likes, and ultimately the most engagement was the one with that cool colorful image.

Hopefully I have provided a clear example of using social networking content to create human-to-human (H2h) interaction, to build a return-on-relationship (Ror) that gets attention, start conversations, create engagements, start and builds relationships, and hopefully, as a result, one day, some way this will turn into future sales.

I would love to hear your thoughts on this. Comment below and share your thoughts, ideas, or questions about human to human marketing and return on relationship. Have you had to overcome any of the presented concepts? What worked and what did not live up to your expectations? Do you have any ideas or advice you could share? 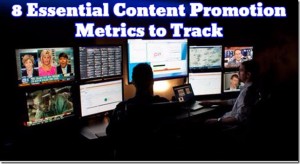 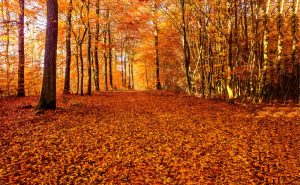