Here’s a free Google Ads script that delivers a detailed report on the impact of Google’s inclusion of “same meaning” queries in exact match close variants. 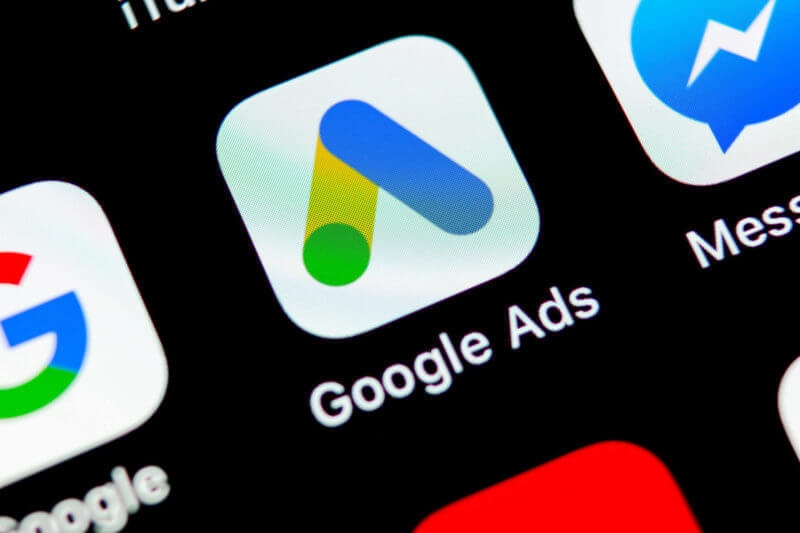 As reported here on Search Engine Land last week, Google is in the process of further broadening the meaning of ‘exact match’ keywords. Based on a 2014 change, these keywords could already be expanded to include singular, plural and misspellings of the exact match keyword.

Last year, Google allowed function words to be added in the query and the word order to be changed. Now Google will further expand ‘close variants’ exact match keywords so ads can be shown for searches with the same intent.

Through improvements in its machine learning algorithms, Google claims it can now better classify the intent of a query. When it finds the intent is basically the same as that of an exact match keyword, the ad may be shown even though the usual conditions of when this match type is allowed to trigger an ad are not met.

We’ve now gotten pretty far away from the old days when we could rely on match types to help restrict when our ads would be shown. It’s no surprise there is a lot of chatter around what’s going on, what to do and why Google is doing this. While I’m all for having an interesting topic to discuss with industry colleagues, I used to be an AdWords Evangelist at Google so it’s in my nature to try and shed as much light as possible on what is happening.

This change will roll out through October so it will take time to see full results, but I decided we need a better report than what Google offers so marketers can see the real impact of this change on our accounts. Here is a script I wrote (which you can download below) and what I’ve learned so far.

Exact match keywords used to be the most restrictive; ads could only show when the query was exactly the same as the keyword. Most complaints I hear about close variants is that exact match no longer works as a super restrictive match type.

We can clearly see this in some examples: 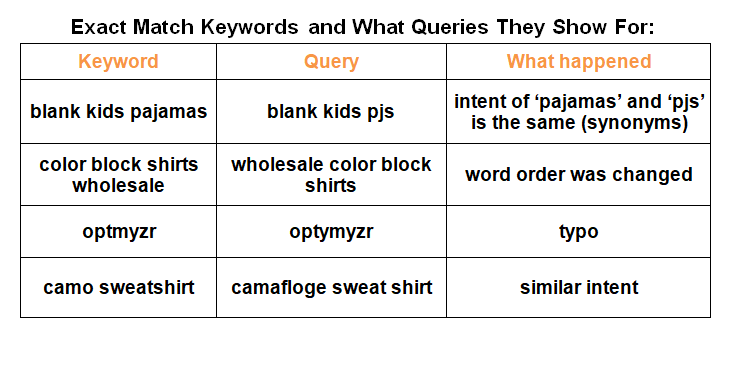 Exact match remains restrictive in that it doesn’t (or shouldn’t) allow the presence of other words with no relation to the keyword itself. The example above showing “Google AdWords analysis” matching to “Google AdWords analyze competition” stands out as quite possibly having different intent. We’ll have to wait and see how tightly Google sets limits on what is considered “same intent.”

For now, exact match keeps the relationship between keyword and query very close. What is a bit surprising is that unlike phrase match where the word order has to be respected, the new exact match allows for word order to be changed.  Does this mean phrase match now our most restrictive match type?

Google has said the close variants change only affects exact match, so we shouldn’t see changes to phrase match. Phrase match means the words in the search must be in the same order and not have different words in between. By and large, this seems to still be the case. Singular, plural, misspellings and stemmings appear in a lot of examples I find, but the word order is respected.

While phrase match appears unchanged, it can’t be considered more restrictive than exact match because there is no restriction on what terms can be present in the query before or after the keyword.

In 2010, Google introduced the Broad Match Modifier (BMM). By adding a ‘+’ symbol in front of any part of a broad keyword, it tells the system to show ads only when that exact word is present in the search. It’s not really a match type but that’s a technicality (check the API) so let’s include it here anyway. 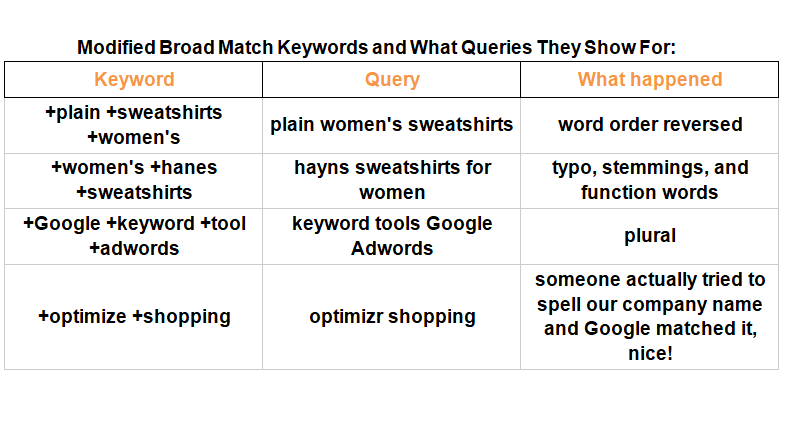 The same close variants that apply to exact are also applied to words that have the broad match modifier. It doesn’t force the exact word to be present but rather like the new exact match, the intent appears to be the same.

Broad match modifier still requires each word from the keyword has a relationship to the words in the query so it remains more restrictive than broad match.

So what is the new most restrictive match type?

We don’t really need to include an analysis of broad keywords since they have always been defined as broad. You can still use the script to analyze these keywords if you want to get a sense of how broad Google is going.

Having looked at some examples of the more restrictive match types, where does that leave us? 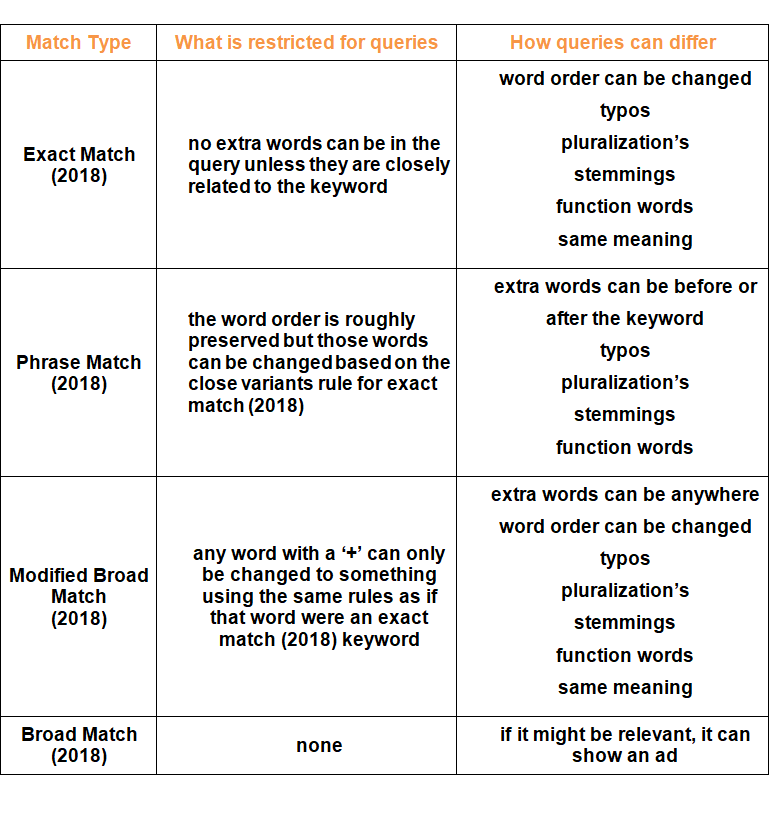 There are now two match types I would consider ‘most restrictive’ but they differ in how they are restrictive:

Get your own analysis

All the examples shared here came from a script I wrote that produces a report showing how your keywords were matched to search terms. You can get this report in the Google Ads (formerly Adwords) interface but it has a few limitations I don’t care for so I wrote the script below to produce a more detailed report.

The script shows the metrics for both the keyword and the search term on one line. This makes it easy to compare the performance of the query to that of the keyword. While it’s easy to judge a query on its own, you may actually miss the fact that the query is outperforming the underlying keyword. This is Google’s point… you may actually want these close variants because they perform well.

For example, the broad match keyword ‘flowers’ is labeled as ‘exact match’ when it was shown for a query that was exactly the same as the keyword which was ‘flowers’. This makes it hard to do an analysis of how broad Google is defining close variants for various match types as defined by the advertiser at the keyword level.

I also added a comparison function to the script so it’s easy to see how different the query and keyword are. I used the Levenshtein Distance for this. It returns the number of characters that need to be added, removed or changed for one string to be turned into another string.

For example, adding an ‘s’ to make a word plural results in a distance of 1. Changing the keyword ‘Yosemite camping’ into ‘Yosemite campsites’ has a distance of 5 because we need to change three letters and add two new ones to do the transformation. Through this numerical value, we can more easily sort the data to see the biggest broadenings first. This will be particularly useful to monitor how the ‘similar intent’ component of the algorithm evolves over time.

Instead of guessing how new match types will impact your account, look at some of the examples I shared and use the free script below to pull data for your own accounts.

Have a conversation with clients and stakeholders to remind them you are good at your job and that with the right processes and resources you can leverage this latest change from Google to grow their business.

Frederick (“Fred”) Vallaeys was one of the first 500 employees at Google where he spent 10 years building AdWords and teaching advertisers how to get the most out of it as the Google AdWords Evangelist. Today he is the Cofounder of Optmyzr, an AdWords tool company focused on unique data insights, One-Click Optimizations™, advanced reporting to make account management more efficient, and Enhanced Scripts™ for AdWords. He stays up-to-speed with best practices through his work with SalesX, a search marketing agency focused on turning clicks into revenue. He is a frequent guest speaker at events where he inspires organizations to be more innovative and become better online marketers. 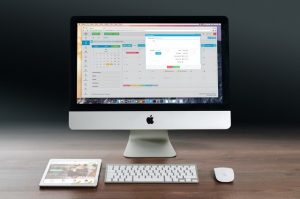 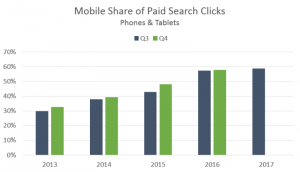 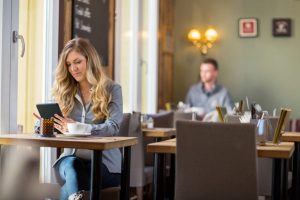 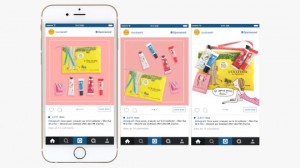 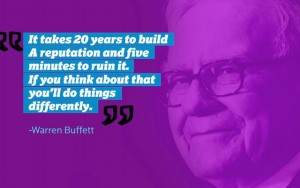