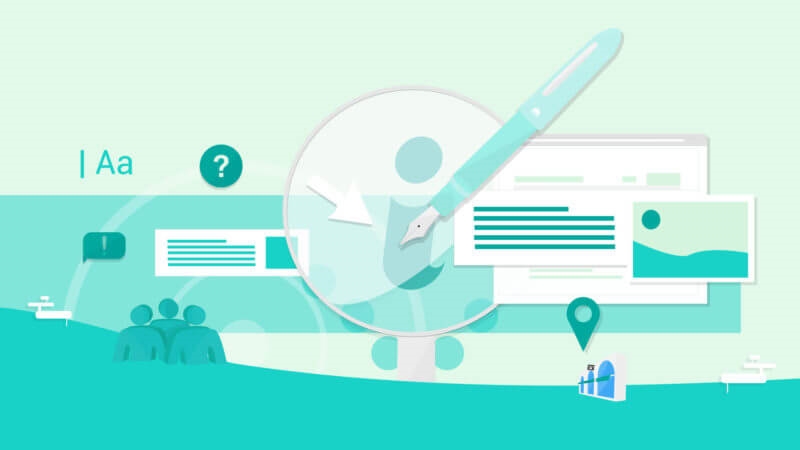 Search engines have a peculiar business model: They exist to quickly direct you somewhere else. This is in direct contrast to your typical web business or social platform, where they do everything they can to keep you engaged and on that platform.

This can’t have escaped the notice of the good folks at Google. And now, many questions are answered directly on the search engine. This keeps you on the page a little longer and (I would imagine) ups the likelihood of your conducting another search or — shock, horror! — even clicking on a search ad.

You have probably seen this a million times, but the following searches should all provide some form of answer directly in the search results.

For these kinds of queries, there is no longer a need to actually visit a third-party website — even when they are directly referencing a business, as in the telephone query example. 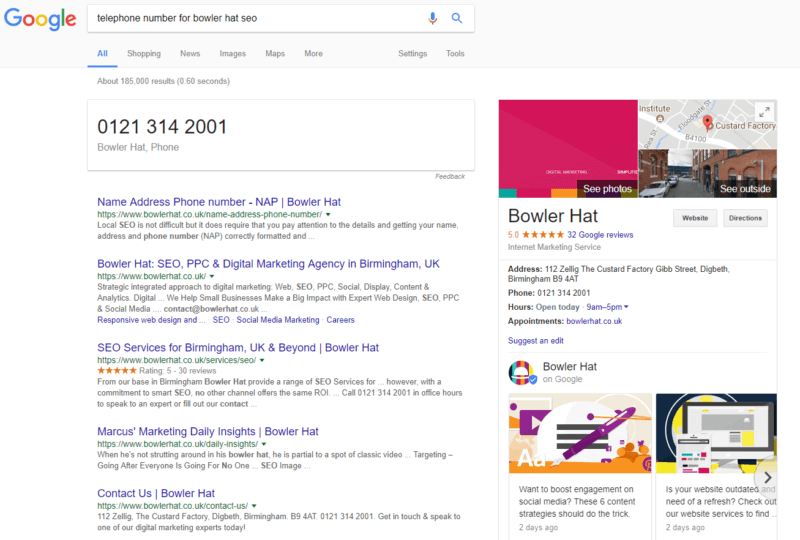 We get answers directly in the search results now, which is often super-helpful for us users.

One particular SERP feature that we are seeing more commonly is known as a featured snippet (or answer box).

A featured snippet is a summarized answer to the user’s search query that typically appears at the top of the search results. The snippet will include a brief answer to the question, a linked page title and the URL of the page. 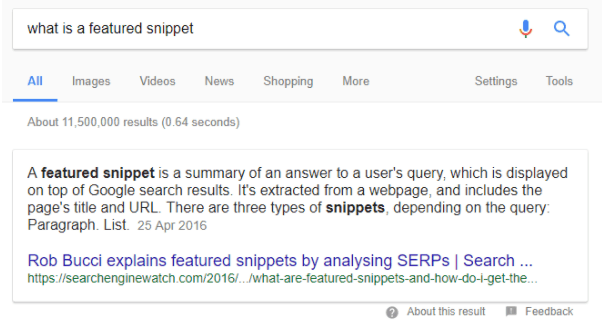 We have been tinkering with some of the posts over on the Bowler Hat blog and have managed to generate featured snippets for a number of them. This is great positioning and is often referred to as “position zero,” as it sits above the standard results with a supersized listing.

As an example, we have a post that provides a set of small business SEO tips, which tends to hover around third or fourth for a variety of search terms. With a featured snippet, we now have visibility above the organic results and within the results themselves. Win-win. 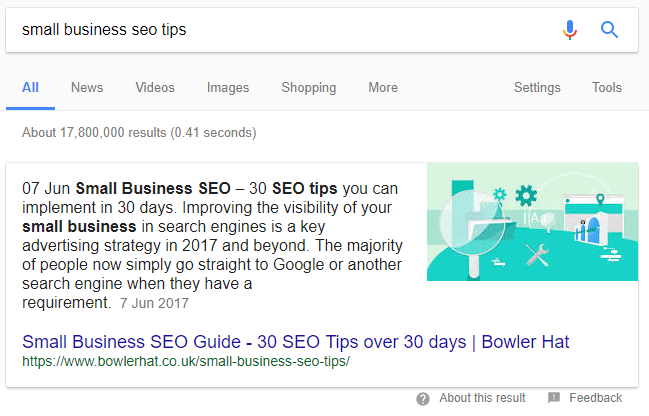 This is great additional exposure. Even though I am not super-keen on the text they are using in this example, from an organic search perspective, what’s not to like?

There are a couple of different forms that featured snippets can take, from the most popular paragraph form to tables to bulleted lists. We have seen bulleted lists taken from content in a <ol> tag as well as from header tags — which just reinforces the need for well-structured HTML.

Featured snippet placement can be hugely powerful from an SEO and marketing standpoint:

* It’s of note that, in our experience, the featured snippets don’t tend to get a huge amount of click-throughs, and they reduce the click-through on the organic listings slightly. So, while it may not set the world on fire, clicks on your snippet and organic listing combined should increase compared to a listing alone, and the exposure itself is going to be highly valuable. And, of course, not all featured snippets are created equal — for the “small business SEO tips” example above, the snippet does not answer the question, so you have to click through to get the goodies.

That’s a notable impact for sure, but we have seen far worse implications in the wild with clients we currently work with at my agency. One client site saw traffic impacted by over 50 percent where a featured snippet has appeared above their #1 ranking. So, these averages are not always useful, and you have to monitor the impact of SERP features like featured snippets for terms you are targeting. For this specific client, that snippet has now disappeared — so a calm head is also needed as these new SERP features mature.

In this case, if a featured snippet appears, your rank tracker may tell you that you are still in position #1, yet traffic has dropped. So ensuring you understand the SERP features is key here.

(We like the BrightLocal rank tracker for this, as it keeps screen shots of each rank report. This is a great help when doing historical analysis of rankings and traffic so we can see what the actual page layout looked like at any given point in time.)

Another feature that tends to crop up along with featured snippets is “People also ask” boxes. These are sets of questions that relate to the original search query.

“People also ask” boxes are an interesting SERP feature in that they are dynamic. When you click on any one of the questions, specific details are revealed and further questions are added to the bottom of the list.

The following image shows both a featured snippet and a “People also ask” box. 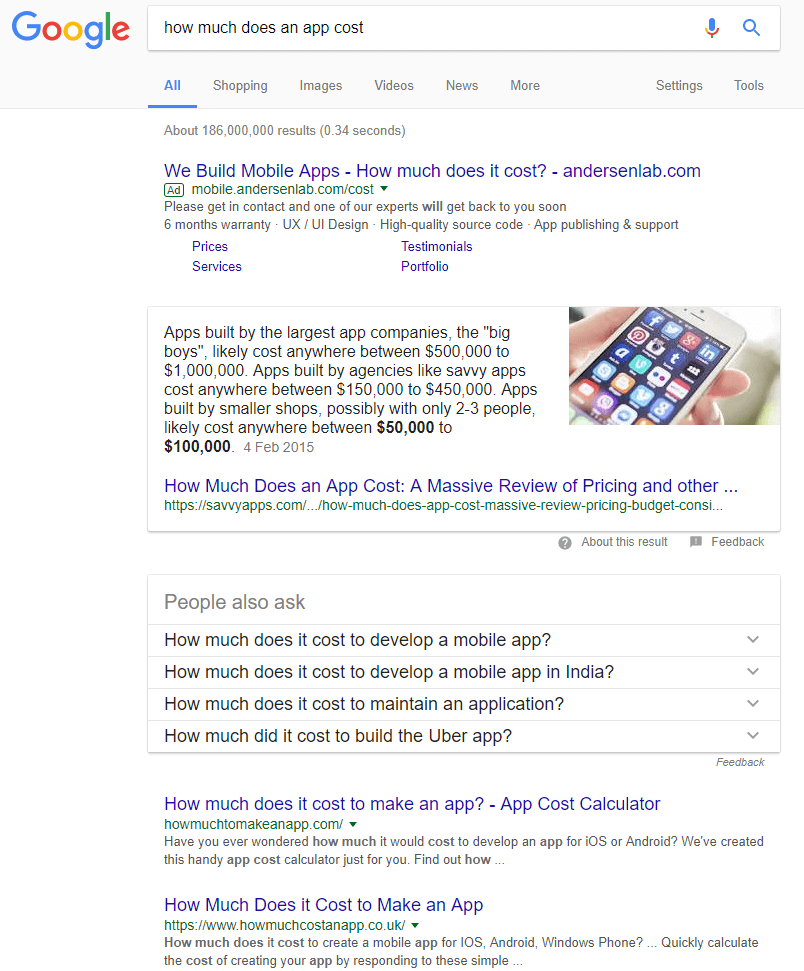 So, if we include the ad links (five with the sitelinks), the featured snippet and the “People also ask” links, our traditional #1 organic listing is the 11th link on the page (jeez). Throw a few more ads into the picture, and that is a lot of links for a user to wade through before they get to a traditional organic result — often with the answer already on the page.

How far down the rabbit hole do you want to go?

As mentioned above, when a user clicks on a “People also ask” question, we see the question itself expand to take up more screen space, and we get an additional two or three questions added to the bottom of the list. 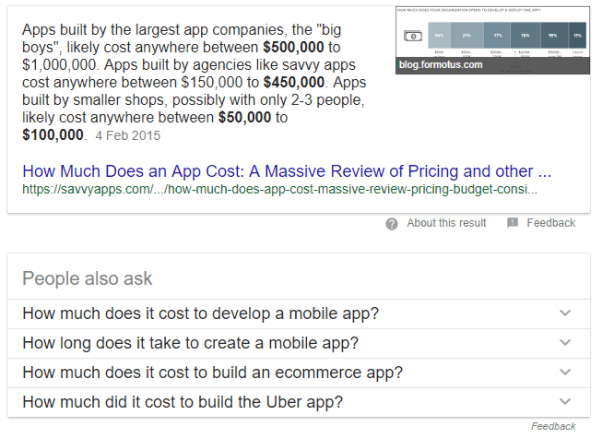 This process repeats itself for each question clicked on. There is seemingly no limit to this, and each click pushes the traditional organic results further down the page.

Here, we see the initial four questions expanded to six questions, with the answer to the first question also revealed. 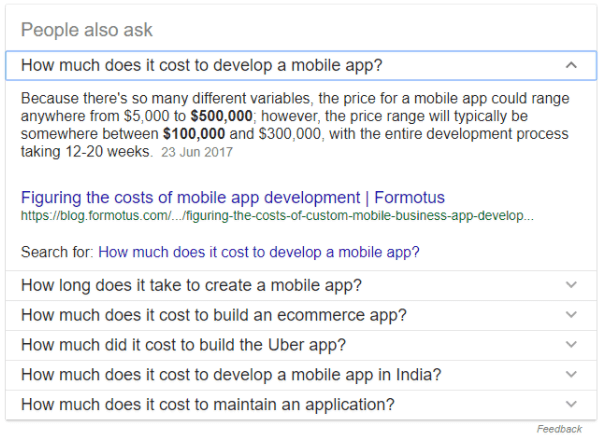 And it just keeps on going and going and going! It really can spiral, and it is almost like conducting new search queries in relation to the questions you answer right there amidst another set of search results. Wild! 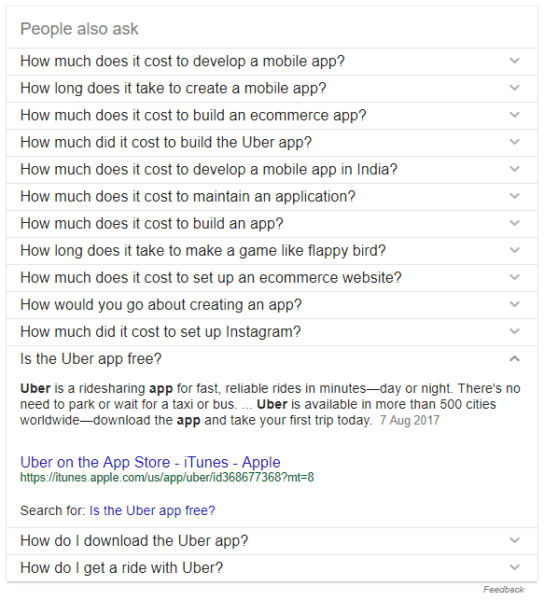 After 10 clicks, we have 10 expanded questions, each about the size of two standard organic listings, and 14 further questions below. This occupies about four total screen sizes of scrolling on a typical desktop before you get to an organic result. This is not intended to be a realistic example of search engine usage, yet it is still a little scary if you rely on organic clicks and don’t have featured snippets.

In the majority of cases, Googling the questions from the “People also ask” results will return a featured snippet. So, if we Google the expanded question above, “Is the Uber app free?” we get the same piece of content as a featured snippet.

So it is almost as if the “People also ask” results are related to featured snippets.

Taking a look at this page and the site itself, which also has a huge number of featured snippets, the writing style is certainly interesting: Short, practical sentences. Paragraphs are, in fact, often just one sentence. It makes for easy reading and (it would seem) for easy digestion by search engine algorithms.

If you are using content marketing as a part of your SEO (and you really should be), then you should also be looking to target these new SERP features to improve your visibility and traffic from organic search.

Fortunately for us lucky campers, there have been a few studies done to identify the patterns here and provide guidance on optimizing your content for featured snippets.

The major takeaways here to optimize your content for featured snippets are as follows:

Fortunately, this is not terribly technical. There are no guarantees, and it requires an analysis of what the featured snippets that you are targeting look like, but with some small tweaks, you can generate big results.

Remember that to get featured snippets, you must already rank well. So, whether you are a small business that needs to do the SEO basics, you’re focusing on SEO and content marketing, or you need to build links and authority — until you rank in the top half of the page, getting featured snippets is the least of your worries. Also, it’s worth noting that if you primarily target local terms, featured snippets don’t show along with a local pack — so this is something you don’t currently need to worry about.

What is your experience with featured snippets? Are you getting that highly desirable position zero? Or are you struggling to get your content to feature? I would love to connect on Twitter and LinkedIn and hear how you are getting on targeting some of these new and exciting SERP features.

Marcus Miller is an experienced SEO and PPC consultant based in Birmingham, UK. Marcus focuses on strategy, audits, local SEO, technical SEO, PPC and just generally helping businesses dominate search and social. Marcus is managing director of the UK SEO and digital marketing company Bowler Hat and also runs wArmour aka WordPress Armour which focuses on helping WordPress owners get their security, SEO and site maintenance dialled in without breaking the bank. 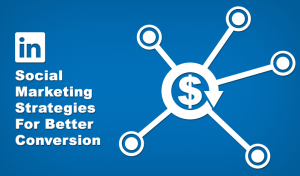 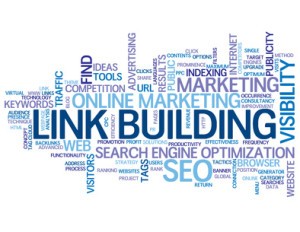 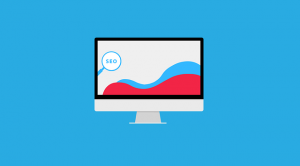