If you already have a couple of videos up and running, and are looking for ideas for how to get more subscribers and turn those subscribers into paying customers, the tips that follow are for you.

On YouTube, you can sprinkle preformatted notification cards throughout your videos. These cards are the easiest way to add interactive elements to your videos and keep viewers engaged for longer. When a video creator has installed a card, you’ll know it by the little “i” that pops up in the right-hand corner of the screen. When a viewer clicks the icon, they’re shown your message, including a link if you’ve added one.

You can add up to five cards to any video and there are five different kinds of cards available (though one of the options listed is available only to brands that are part of YouTube’s Partner Program). Here’s a description of each cards.

Allie Glines added playlist cards to her tutorial video to steer her viewers to other videos.

At the very least you should insert an end screen during the last 20 seconds of your video, pointing people to whatever video you want them to watch next, reminding them to subscribe, or prompting them to visit a landing page where you have information about a special offer or contest. 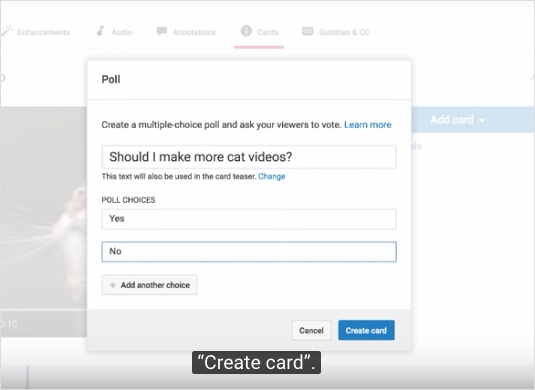 This is an example of a Poll card. You can insert a poll card in your YouTube video and learn more about your audience’s interests.

While watching YouTube videos is typically a fairly passive activity, you can make the videos more engaging by adding things like the cards described above. And you can incentivize engagement even more, and collect leads at the same time, by running contests and giveaways. One of the best incentives a brand (or a blogger) can offer on YouTube is a prize.

In fact, YouTube’s very first viral video was linked to a contest. “The Extreme Diet Coke & Mentos Experiments II: The Domino Effect,” was created by two guys who do kooky science-y experiments. Their Mentos/Coke video was part of a campaign to drive traffic to a contest at Coke.com. The video got 8 million views, doubled traffic to Coke.com for three straight months and was one of the top-viewed YouTube videos for several years (this was before “Despacito” and “Gangham Style,” and other music videos, started getting views in the billions).

A few years later, Ford ran a similar contest — The Fiesta Movement — for which they gave away cars, in this case 100 Ford Fiestas the winners could drive for a year. Yes, a car is a huge prize. But consider the results: Ford tracked more than five million mentions of the contest on social media and saw a 38 percent boost in awareness of the Fiesta amongst a targeted (Generation Y) audience. All that without spending money on traditional ads. 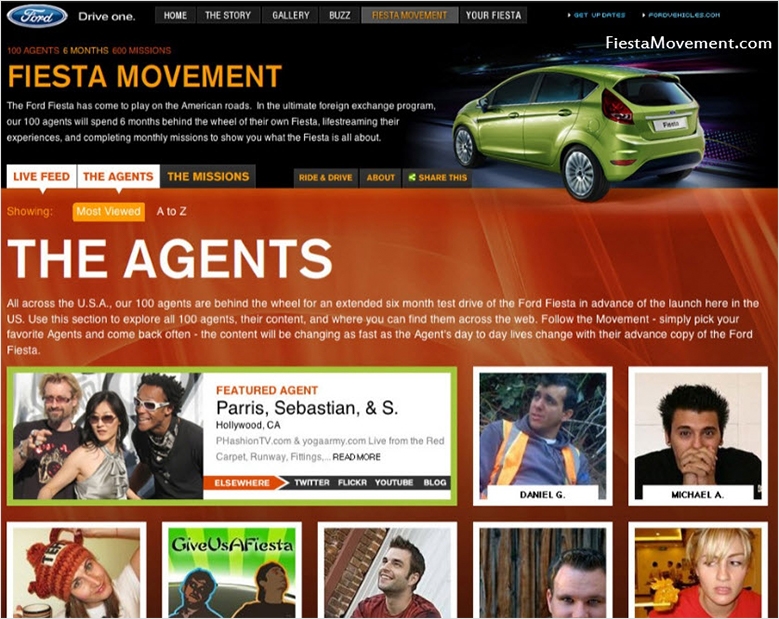 When Ford ran a contest giving away 100 cars, they saw a huge response.

Before I get into the various kinds of incentives and contests you can use on YouTube, I’d be remiss if I didn’t point out some of the issues facing all social networks these days. Every platform is being forced to be more protective of user data and user privacy, and guidelines seem to change by the day. That’s why I’m increasingly recommending that brands and bloggers alike host contests and giveaways and other promotions on their own websites, or as landing pages/microsites, and then promote the campaigns on the various social channels. It’s actually a win-win for brands because you’re able to control your users’ experience, keep more traffic on your own site, and safely collect the data that’s most valuable to you.

Before you grab your camera and start filming, take a moment to understand YouTube’s rules for contests and giveaways. Like other social platforms, YouTube has rules creators must follow when they host contests. For starters, YouTube does not allow contests to be run through ads. (You can read the complete list of policies and guidelines here.) YouTube’s vast community guidelines encompass contests, so make sure you’re familiar with those as well. 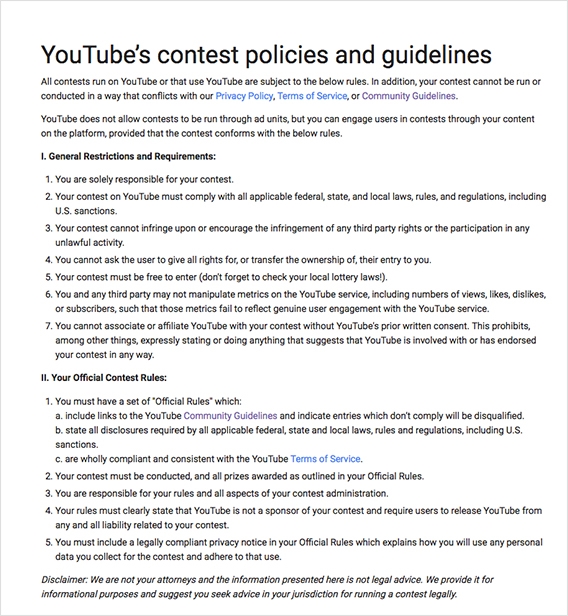 Here are some of the most important rules to be aware of, and what they mean for your contest*:

2. states all disclosures required by all applicable federal, state and local laws, rules and regulations, including U.S. sanctions. What it means: On your official rules, include details about the value of your prize, including information about prize registration and bonding, and tax liabilities.

The following YouTube rule is stated separately, under YouTube’s conditions of use, but it’s a biggie: You may not offer or promote prizes or rewards of any kind in exchange for clicking on a YouTube subscribe button.

Finally, if your contest is sponsored by a third party — as in, you’re giving away a prize that was given to you, or the company whose prize you’re giving away sponsors you — you must disclose the sponsorships, per the Federal Trade Commission. The verbiage can be as simple as: “FTC Disclaimer: Some of the prizes offered in this giveaway were given to me by XYZ company and some were purchased by me” — or whatever the case may be. You can read all about FTC guidelines and other suggested verbiage, here.

Decide on the Type of Contest

Whether you decide to run your contest on YouTube, or simply promote it on YouTube, there are lots of options for YouTube contests. Since I’m focusing on collecting leads, I’m only going to talk about those options.

Let your fans decide what they like best. Display two or three different videos and have your users vote on their favorite. Before they can vote, they have to fill out your form. Here’s how you’d set it up.

In this example, you own a restaurant and you’re giving away a huge haul of BBQ tools in honor of an upcoming event — let’s say, the 4th of July. You create a video announcing the giveaway and direct people to your landing page where they can watch three quick how-to videos showing off different grilling recipes. Then they get to vote on their favorite of your three recipes. BUT, before they can vote and get a chance to win, you require them to fill out a form, sharing their best email address with you. 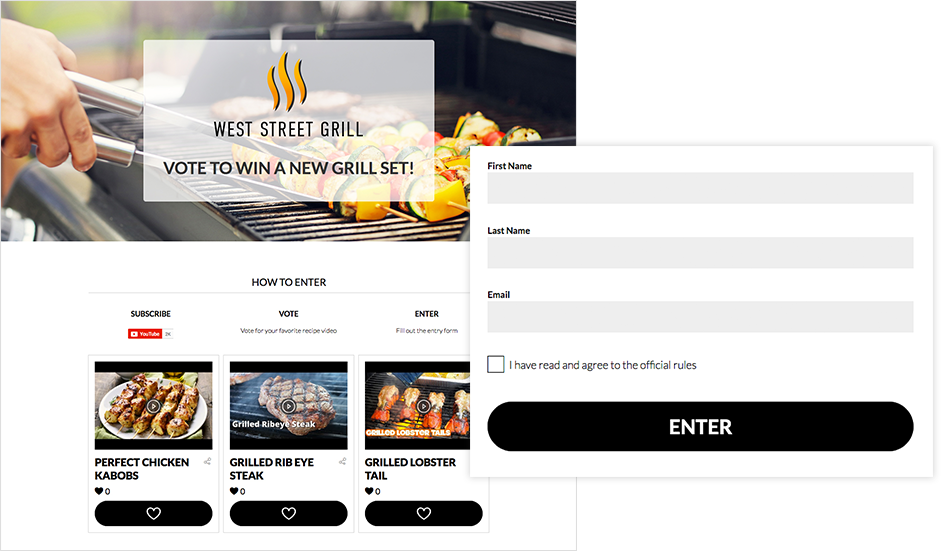 Have your followers vote on their favorite video in exchange for a change to win your prize. The more they share, the more chances they have to win.

You choose a winner at random, but make sure you follow-up with everyone who entered, sending them a thanks message, and if it’s appropriate, including a code for a discount on your products.

If you’re worried about cheating, you can let people know that the top 10 vote-getters will be entered into a final round and then you, or a panel of judges, will choose the final winner. 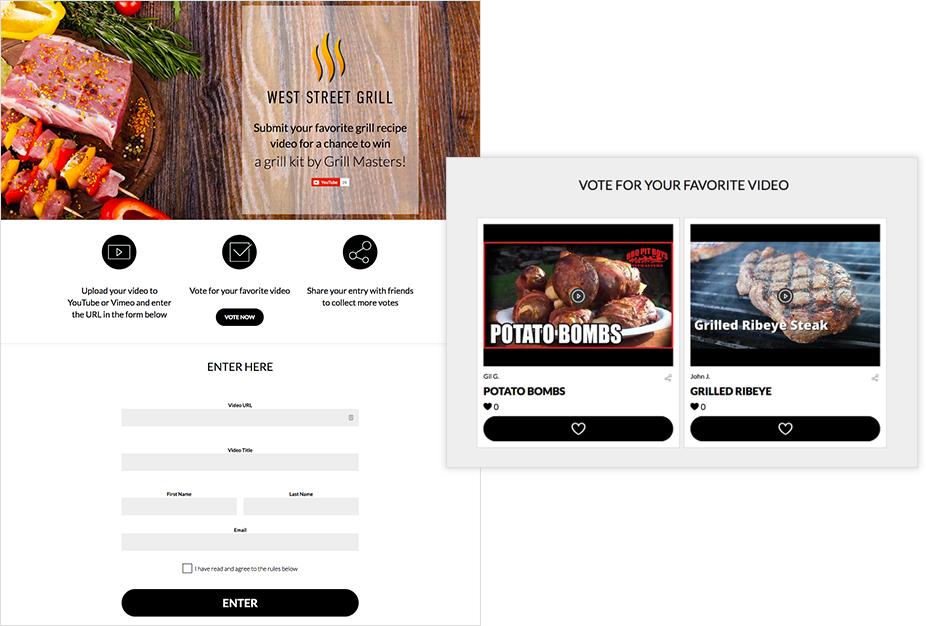 Have your followers upload their own image, vote on their favorite and share to get more votes.

Comment-to-win contests are the most popular type of YouTube contest or giveaway because they’re so easy to enter. To enter, people just have to, yep, leave a comment. My biggest issue with this kind of contest is that it’s hard to manage entries, and it’s even harder to collect any meaningful contact data.

Of course you could set the contest up so the comment works like a poll, asking people to comment with the name of a favorite product of yours, or asking them to “fill in the blank,” giving the answer to any question you want to know, or to caption your video. What I’d recommend, though, is making contest more useful for you by awarding extra chances to win for anyone who clicks over to your landing page and then fills out your form. That way you’re collecting comments and leads. 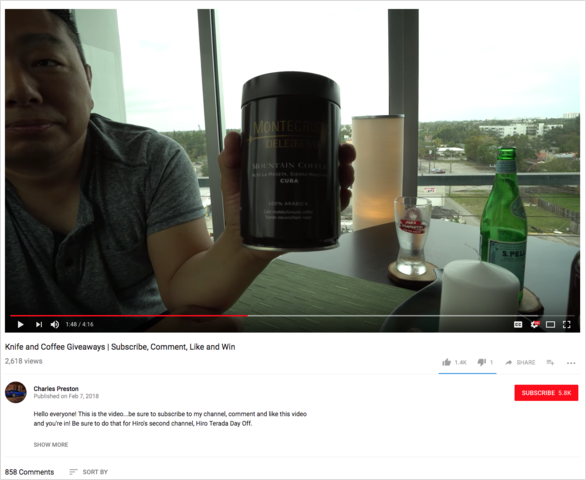 Charles Preston is a sushi chef who hosted a “comment to win” contest.

Here’s an example from Kristin Omdahl, a woman who shares knitting, crocheting and sewing tips on YouTube. She has a campaign running where if you subscribe to her channel and share your email address, you can download one of her knitting patterns for free, and be entered to win her popular book of knit and crochet patterns. She certainly has a niche market, but she’s doing a great job of giving away something she knows her followers will value. At the same time, she’s building subscribers. 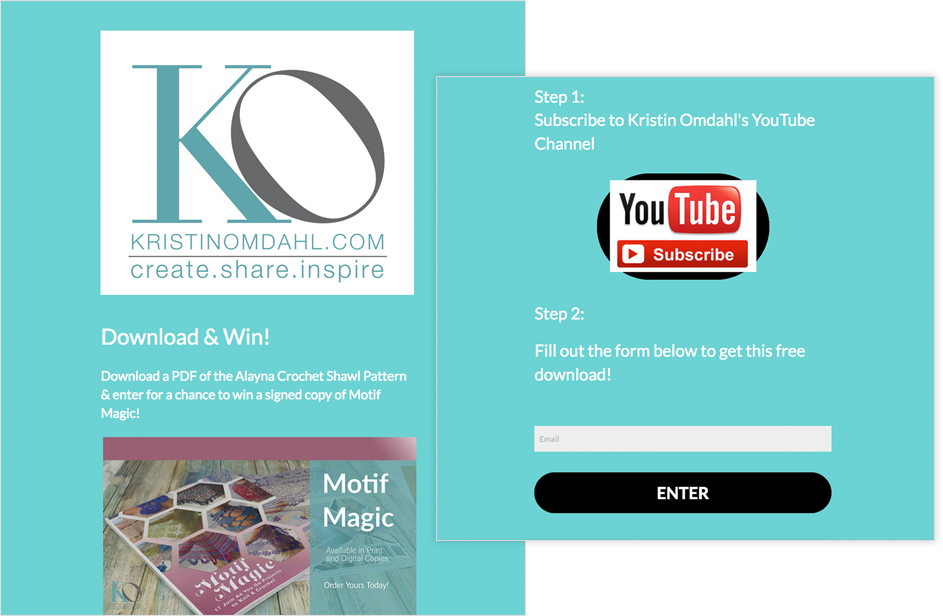 Get the Word Out

As any marketer knows, the time when we could post a piece of content and it would get all the organic attention we could dream of are long gone. These days, whether you’re trying to get eyes on a blog post, or a contest or any other sort of promotional campaign, you’re going to have to get creative with promoting your campaign. That is, unless you’re doing something like giving away motorcycles like Harley Davidson is with their #FindYourFreedom campaign — which every media outlet picked up within hours of the announcement. 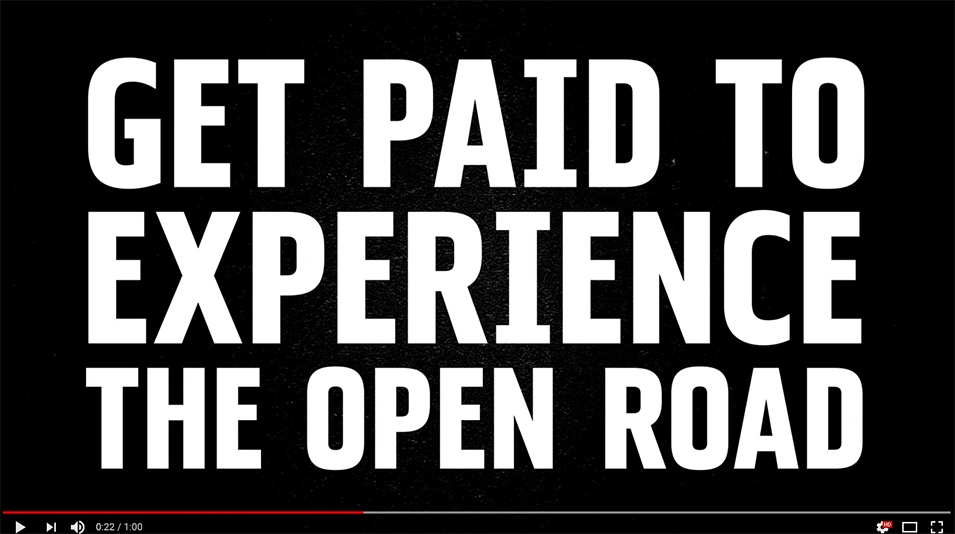 Harley Davidson is hosting a promotion that includes a free motorcycle and a paycheck to ride the bike for the summer and write about it.

If you’re using contest software, ideally there are built-in features designed to make the campaign more share-worthy. For example, you can use a “refer-a-friend” tool to award extra chances to win to anyone who shares your contest. You should also promote your contest on your own properties, including your website and blog, your newsletter, and your social channels (including updating all the headers on your channels). Since email still enjoys higher conversion rates than any social network, don’t forget to send an email blast to your lists. If you have good relationships with influencers, encourage them to share a link to your promotion, and don’t be shy about investing some money in paid ads.

If you’re looking for a way to get your business in front of a massive audience — and turn those people from passive viewers into engaged potential customers — a contest is the way to go. You can use a contest to collect UGC, and to drive traffic to your website or landing pages. Let me know if you have had success with a YouTube contest.

*This is not legal advice, I’m not a lawyer. It’s our interpretation designed to help you get on track.

Dana Sullivan Kilroy is a writer and editor, and director of content and communications at ShortStack.com, a marketing-software platform. She has written for publications and sites ranging from The New York Times and O to Fast Company and Inc. Reach her via Twitter. … View full profile › 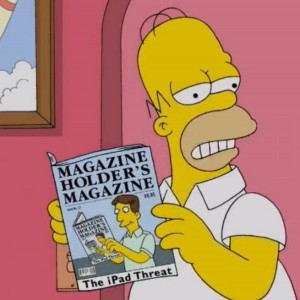 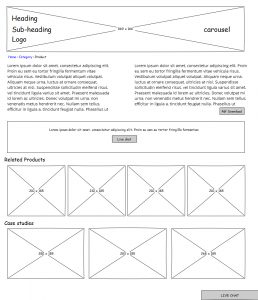 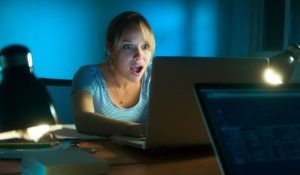 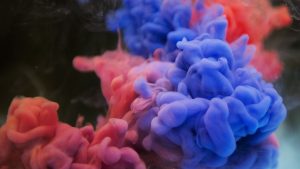 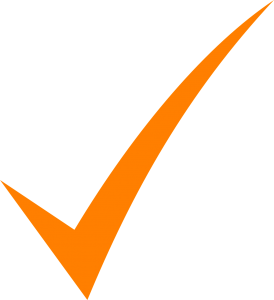