5 Things to Know About PPC Advertising on DuckDuckGo

5 Things to Know About PPC Advertising on DuckDuckGo 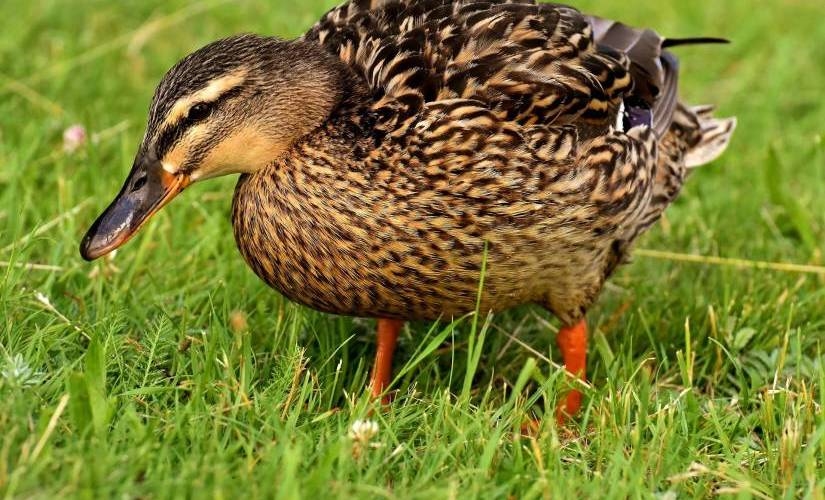 If you are thinking about advertising your business online, the first place you probably think of is Google. So, of course, it makes sense since the search engine giant commands most of the market and billions of monthly searches.

However, you have probably noticed advertisements starting to spring up lately for another search engine. One advertises more privacy online by not tracking you and being described as a more ethical version of Google.

That search engine is called DuckDuckGo. The name may be a mouthful, but the anonymous search engine has gained traction faster and faster in the last few years. According to Similarweb data, there are about 1 billion visitors per month on the site.

Despite having a fraction of Google’s traffic, a billion is still a billion. So here are five things to know about tapping DuckDuckGo as an advertising channel for your business.

How DuckDuckGo Shows Their Ads vs. Other Search Engines

DuckDuckGo advertising is pretty straightforward. DDG will show an ad based on a keyword when a person searches for a keyword. Their example is that if you search for a car, you will see ads for cars.

They might show ads for the type of car you were watching videos about recently on other search engines. It might even seem like they show ads when you just think about something without searching for it (which is kind of scary).

So, you can look at it one of two ways. You can see it as a downside that your ad won’t show after someone says or does something related to your specific product. But, on the other hand, you can be relieved that no one will be scared away from your brand by ultra-targeted advertising.

I think we all know that uncomfortable feeling when we talk about something near the Alexa or our smartphone and see an ad a few minutes later.

If you want to show ads on DuckDuckGo, then you will also need to show ads with Bing. DDG is part of the Microsoft Ad network, and the only current way to advertise with them is to sign up for both.

An outdated DDG help page here shows how you can manually select an option in the ad settings that will start rotating your ads to show on DuckDuckGo. Unfortunately, if you look around in the admin area for Microsoft Ads, you will not be able to find what they are referencing when they talk about that.

According to Capgemini Business Analyst Rupam Bilani, creating a Microsoft Advertising account will circulate your ads through all platforms in their network, including DDG.

Setting up an ad for DuckDuckGo is pretty simple. Here’s an example of one that I was running at the time of writing this for my forecast publishing site, yourweatherconnectiondotcom.

When you want to run your own ad, the first thing to do after setting up an account clicks on the button that says “+Create new smart campaign” shown in the screenshot above. You may also be guided directly to set that up after making an account.

The first thing that they will want to know is what your advertising goal is. Do you have a physical location where you want foot traffic? How about website visitors? Pick the one that best fits your needs.

You will then need to select which business you’re planning on advertising. In my case, there’s only one for now.

Then, they will want you to select where you actually wish to advertisements to show. 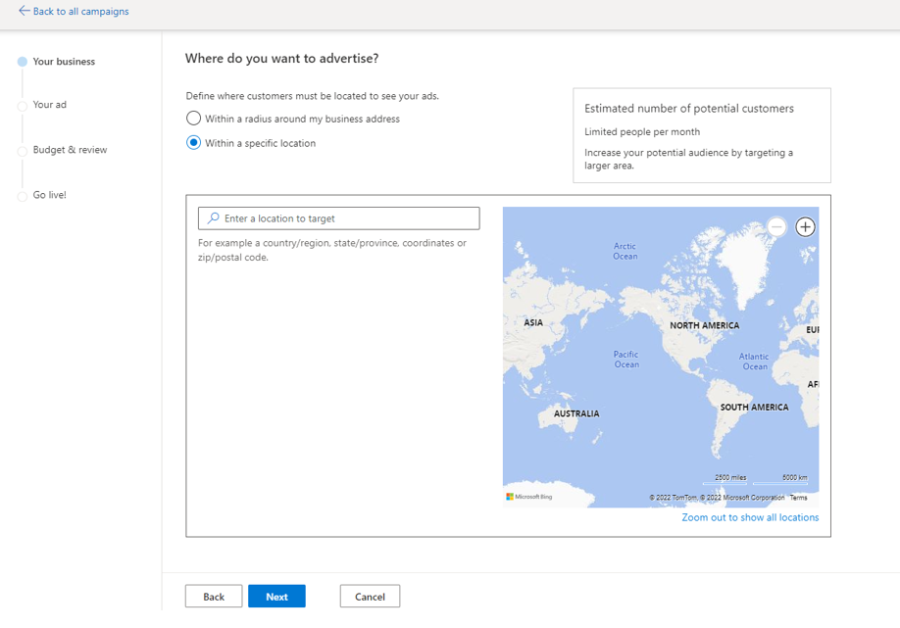 This feature is beneficial because you can use the feature to go as broad as an entire country or down to a specific zip code.

After entering the location or locations where you want to advertise, it will be time to go and look at keyword themes. 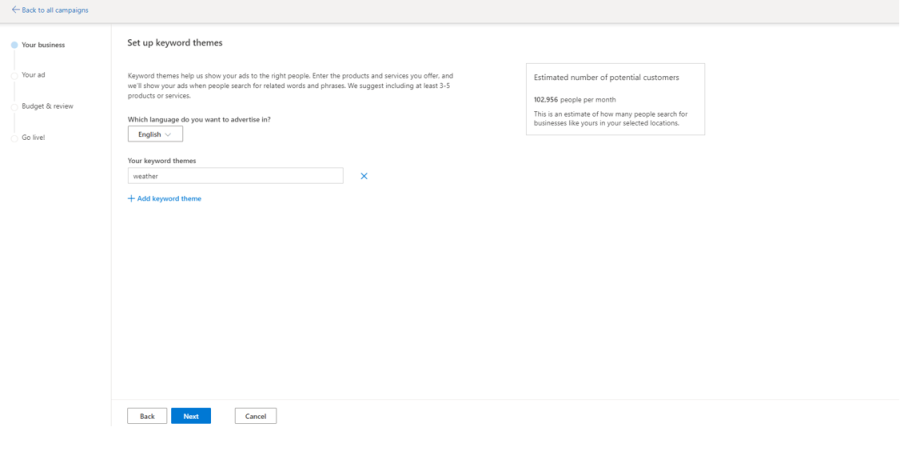 They recommend adding at least 3-5 products and services that you offer. This makes sense if you run an online retail business or have multiple types of products.

If you run a small business that just does one type of thing like painting, try to brainstorm the different things you might do on one job. For example, outdoor painting, indoor painting, wall/ceiling repair, interior stripping, and refinishing would be great keywords to add.

Next, it’s time to fill in what your ad should say. 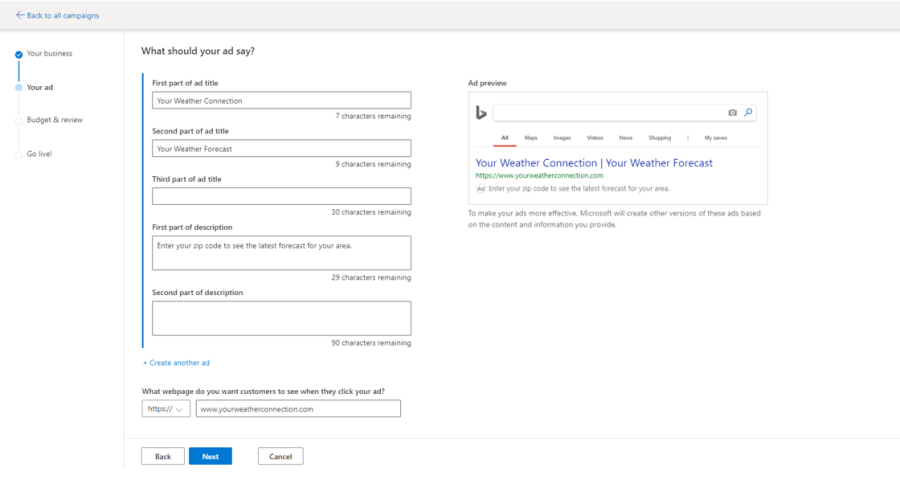 There are options for three titles you can add in, but don’t feel like you need to use all of them. In my case, it made sense to just stick with two. However, adding a third looked like this in the preview:

There is a note that mentions how Microsoft creates other versions of the ad. That may mean the third part would get dropped, and the ad would be optimized to look as appealing as possible, but I can’t say for sure.

The next screen will ask you for your phone number, which may or may not make sense for your business.

Pricing and Setting Your Budget

Next, you will be setting your budget for the ad campaign. Be really careful not to accidentally set it higher than you can afford. Even if I had $ 57,946 to spare every month, I think I could figure out other ways to invest in the business besides putting that into advertising. 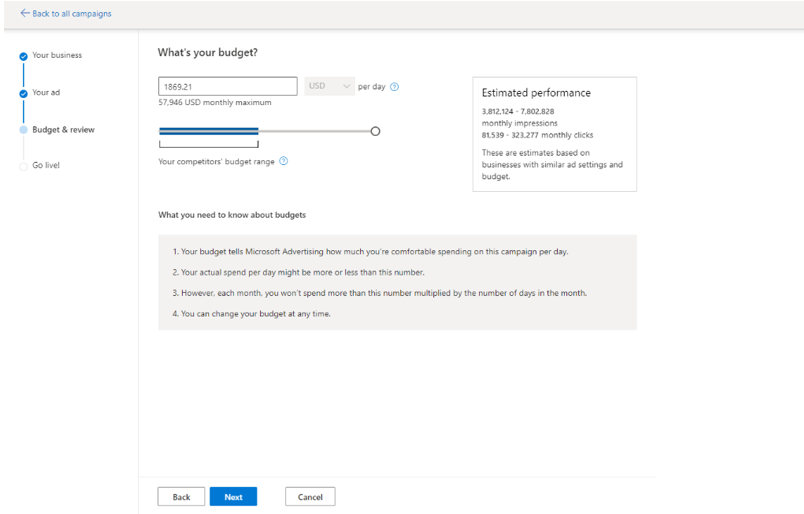 Clicking “Next” from that page will put your campaign into review, and it will go live once someone has given it the green light on their side.

Most ad networks out there have restricted categories. Even the ones that advertise within unmentionable spaces like the adult industry have certain things that are off-limits.

According to Microsoft, “Advertising for the following products/services is either not permitted or subject to specific participation policies: alcohol; deceptive products and services; drugs and related paraphernalia; endangered and threatened species products or services; fireworks and explosives; infant feeding; tobacco and electronic cigarettes; and weapons, knives, firearms, and ammunition.”

Alcohol is one thing that is allowed but subject to their participation policies. So basically, your ad needs to be similar in format to pretty much every other alcohol ad out there.

That means no targeting minors, including proper health warnings, encouraging responsible drinking, and other essential requirements. You can check out the rest of those here.

A handful of the categories mentioned aren’t entirely banned but just have specific rules you will need to follow.

They also don’t allow things like essay writing or pre-written essays. So basically, if it feels wrong, like cheating or any kind of law-breaking, then it’s probably not allowed.

DuckDuckGo Advertising: Tying It All Together

As privacy concerns get bigger every day, more people are starting to use other search engines that respect theirs. That’s why it could potentially help your business a lot to leverage DuckDuckGo as an advertising channel.

Before you do, it’s crucial to understand how they show their ads, why you need to work with Microsoft, what their ads look like, pricing, and what products you need to avoid or be careful with.

The post 5 Things to Know About PPC Advertising on DuckDuckGo appeared first on ReadWrite. 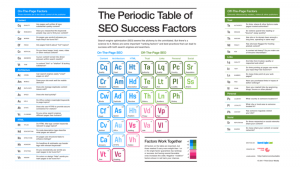 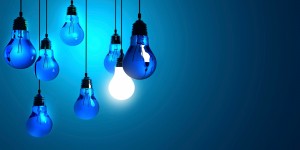 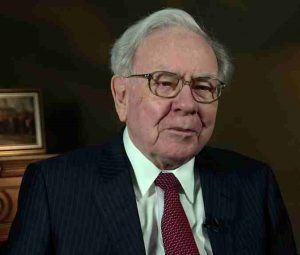 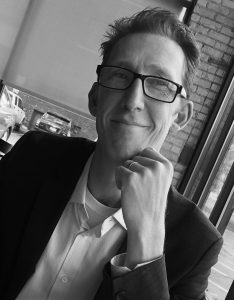 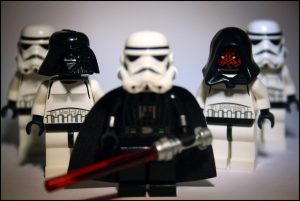 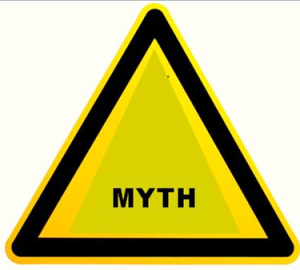 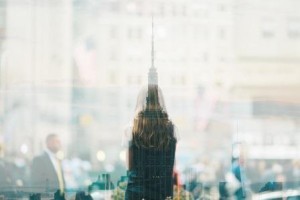