“Assume capability, not intent,” is part of a military maxim used in intelligence. While somewhat more arcane when employed in intelligence, its shortened form can serve as an effective and simple reminder of how to approach those with whom we interact in the business world.

Have you ever sat in a meeting and watched the people around the table and started writing your own narrative about them? Your thoughts range from:

“He doesn’t care,” you say about one person.

“She has an agenda she’s trying to push,” you smugly say to yourself about another.

And then there is the inevitable, “He’s lazy and doesn’t want to get the job done.”

What’s the common denominator of such narratives? They are all judgment based and blindly come to conclusions about the intent of each individual, based on nothing more than opinion and feelings. As such they do nothing to enhance our personal and professional relationships and thus materially contribute to distrust, making them detrimental to how a team operates.

And in the process of assuming intentions, we create barriers of emotion and misunderstanding between individuals. And then if we pass on those ill-founded conclusions to other members of the team, it can lead to triangulation, which further erodes trust.

Unfortunately, judging intent is easy, and we all succumb to it at one time or another, probably because it can help us justify our own feelings and impressions. Think about it, though. Did you ever try to even figure out your own intentions? It takes a lot of deep thought and work to determine what is going on inside of yourself. How could you presume to know what another person is thinking? It’s impossible.

Wouldn’t it be better to approach the narrative you develop in a way that helps you determine an individual’s capabilities so that you can become more curious rather than more judgmental about them? You can start with a few assumptions about those capabilities, and then use them to become more curious. Harness that curiosity to learn and to benefit from the learning. Think about the narrative in the second paragraph this way:

“He doesn’t care,” could be replaced with, “I’m sensing a lack of interest in Bob. I wonder if he’s just got too much on his plate. Maybe he doesn’t understand his role and can be helped with some mentoring. It’s important that I ask him about later. Or maybe we can take a break and have a private conversation.”

“She has an agenda she’s trying to push and wants to get promoted,” could be substituted with, “I’m curious about Janet’s approach. I wonder what expected outcome she sees for this project. She’s a smart person and could really help this team. I need to find out!”

The inevitable, “He’s lazy and doesn’t want to get the job done,” can be reframed with, “I know the project is stalled. I wonder what details I don’t know about Larry’s job function and what might be happening in his life. We need this job done and I believe he can do it – I just need to dig into what’s going on.”

In each case, the observations and occasional assumption about capability is approached from a learning standpoint, not one of judgment. By doing so, we liberate ourselves from leaping to conclusions and embracing the destructive “junk food” of judging the intentions of others.

We are all part of a system, be it two of us, a team, or even a corporation. The norms of such a system are based on values and beliefs. And a personal belief like assuming intention can derail our relationships before they even leave the station. As a coach it is my role to notice when I think this occurs and to become curious about it – and most importantly, not to assume the client’s intent – just his or her capability! It’s an approach that can serve any leader and help build communication and trust in the members of the team. 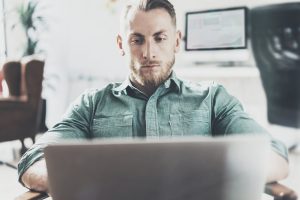