It’s easy to forget the potential that film has to offer. Sometimes making a video can be seen as a functional process. Plan. Point. Shoot. If you simply follow the production process, you’ll have a video that probably does the job. But filmmaking is an art form. And within each step of production lies the potential to elevate, and make more impactful content.

We’ve recently made a film called The Watcher to illustrate how spending time on the filmmaking basics can really help elevate and transform the quality of your video content. Because in the end, your film’s quality is a direct reflection of your brand and your message. In the film we break down the filming craft into 5 fundamentals. Here they are in a little more detail.

A fundamental part of any video. So many videos use lighting for no more than its functional purpose. But with a bit of imagination lighting can do so much more.

Bring a considered approach to lighting and you can add cinematic quality to your visuals and make a statement. Lighting can say more than words can, evoking feeling or tone, a time or place. It can emphasise, draw the eye, take an ordinary scene and inject it with intrigue, beauty, suspense, drama, levity…

In the Watcher, we demonstrate the different looks you can achieve within the same shot. First, low-key, dramatic lighting with hard shadows cast through a venetian blind to recreate the classic black and white film noir detective look. Second, a pulpy neon thriller with tangy shades of pink and blue. Wildly different styles of lighting that evoke a different mood, tone and setting.

Lighting can also be used more creatively. In an early scene, we simulate the effect of a passing subway train by having light travel through the frame. Silhouettes and shadow add to the suspense and intrigue of the tunnel scenes. By simulating flickering lights we create dramatic build up before a fight breaks out in the film’s climax. 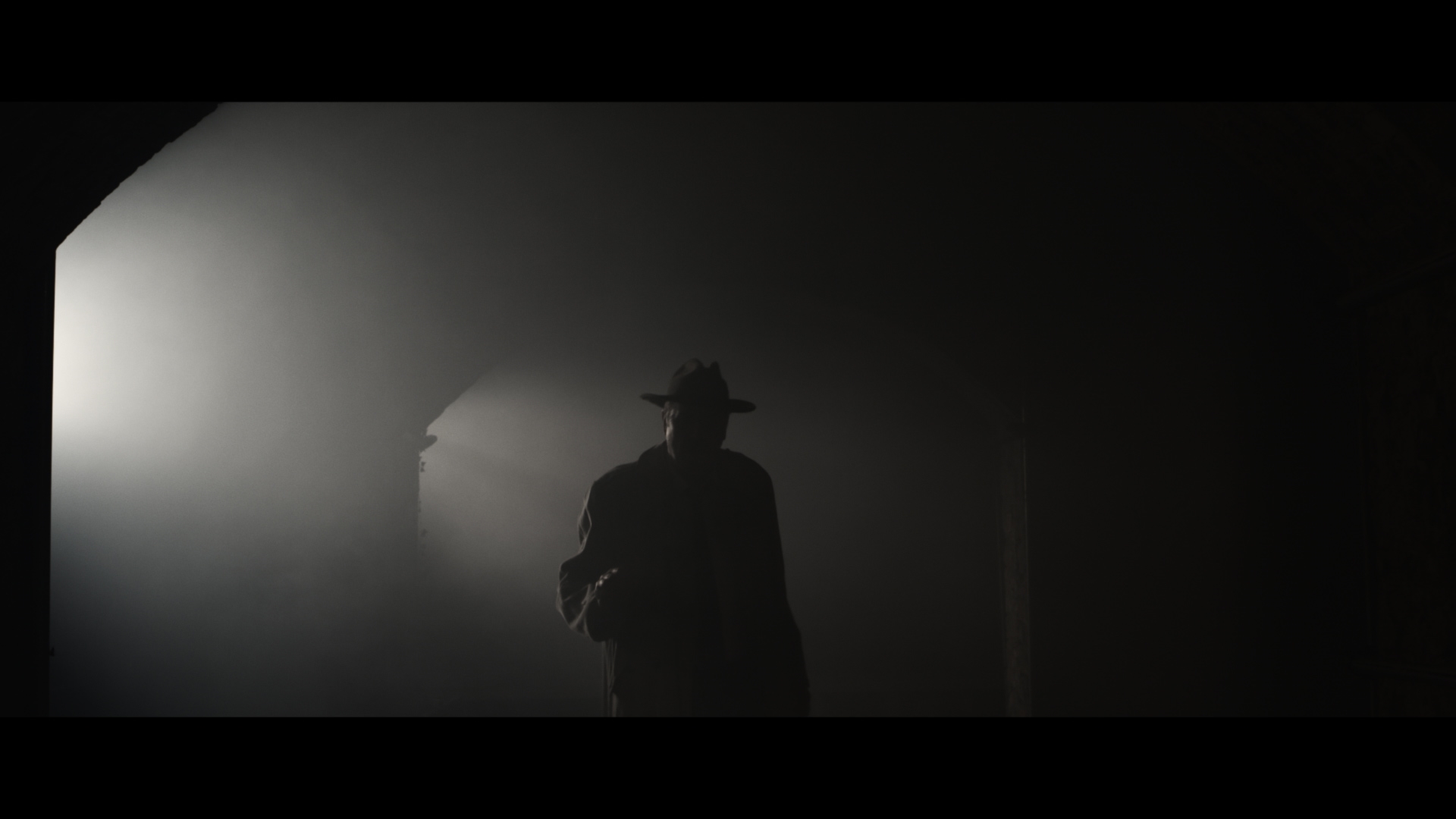 If a prize had to be awarded for the most neglected area of video production. Colour grading might just be the winner.

Colour grading gives you access to the attributes of an image such as contrast, colour, saturation, detail, black and white levels. With consideration, it can give your film a layer of cinematic polish, enhancing the overall look and style.

More involved colour grading gives you access to advanced correction and masking tools that give you precise control of where the viewer’s eye should be drawn.

In the Watcher, the lighting was designed with the colour grade in mind. From the future neon scene to the classic black and white detective noir look, we used the colour grade to amplify the film’s distinctive style. 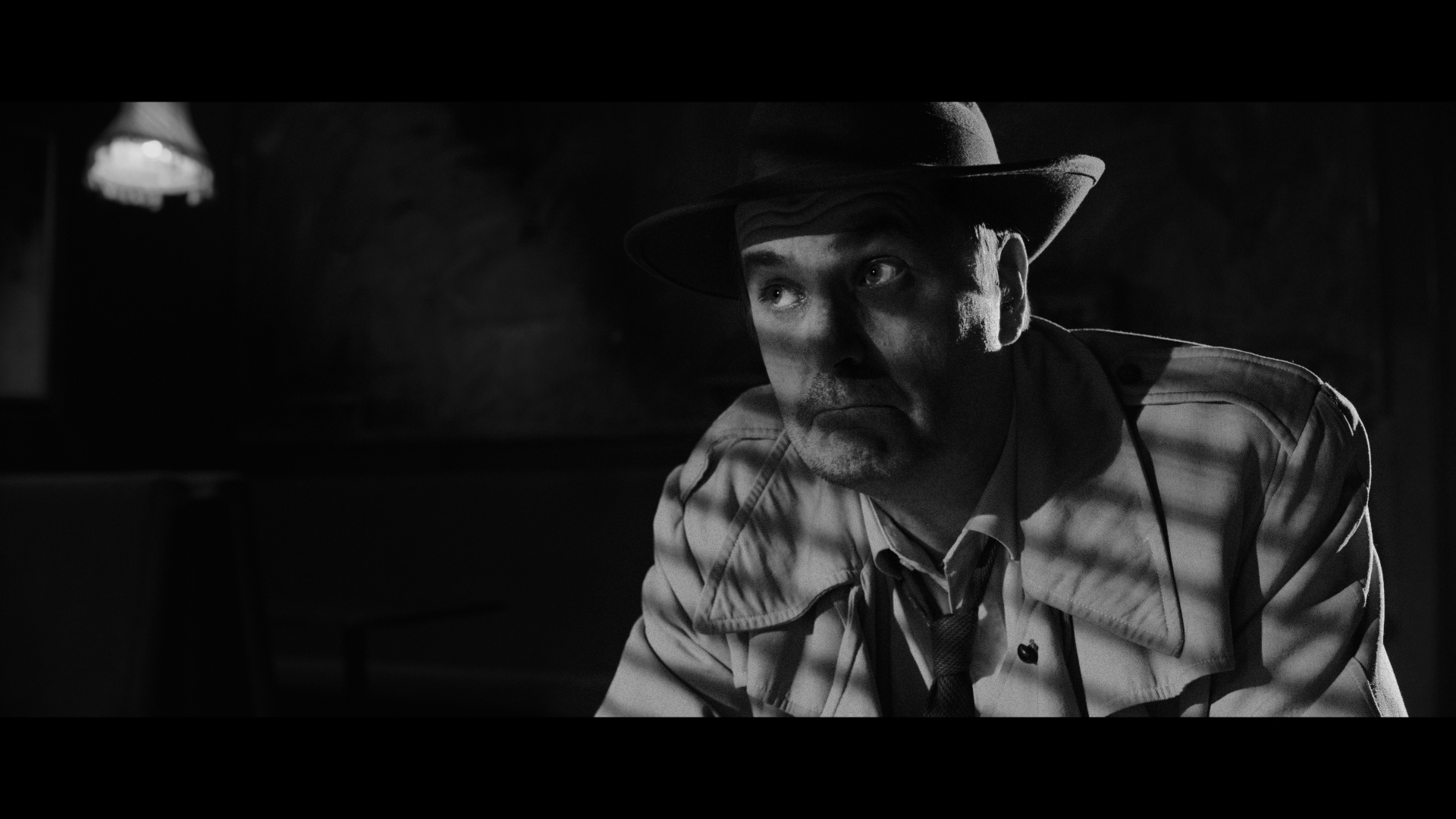 So much attention is paid to what we see in video, sound is often an afterthought. And with so much video being consumed without audio, a heavy reliance on subtitles means that sound is often a low priority.

The role of sound is as broad as the visuals. Sound adds impact to the action onscreen, it can used to evoke a setting, a feeling, add tension, humour, suspense and more. It’s a deeply creative process that can shape the viewing experience.

And sound doesn’t need to simply add to what is happening onscreen. It can add extra dimensions and ideas that visuals alone can’t capture.

Sound has a constant presence in The Watcher. The passing subway trains exist only through the sound. The atmosphere of the tunnel scenes are brought to life with the noise of squeaking rats, echoey footsteps and voices in the dark. The sounds of police sirens, outside street ambience and bar chatter create a sense of a world that lives beyond the edges of the frame. 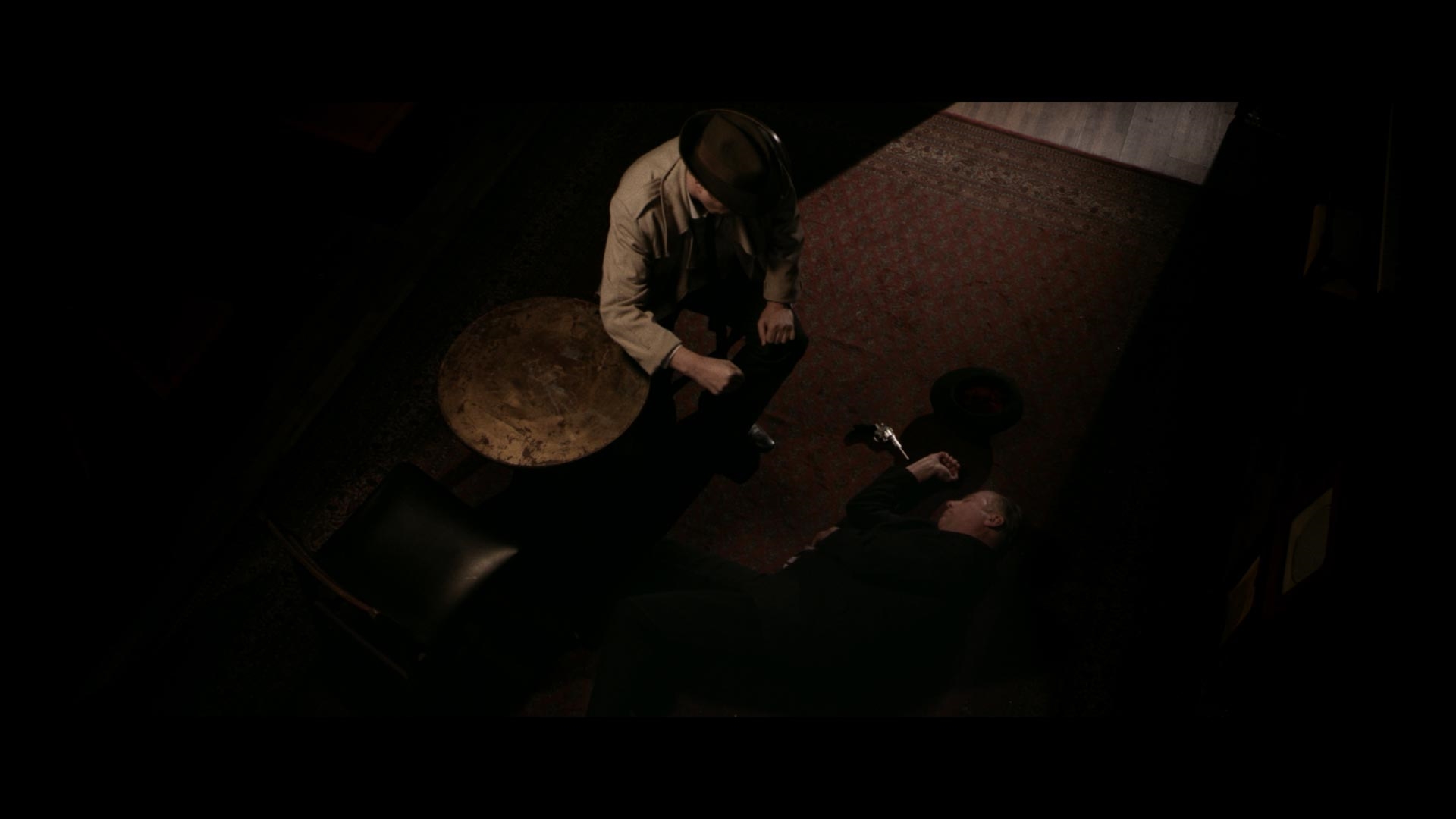 Unlike sound and colour grade, music is often overused in video production. An easy shortcut to add to the desired tone. Music can be treated as an afterthought and feel like background noise.

Music libraries are a great tool. With access to tens of thousands of tracks from every genre, the choice of music has never been greater.

But making the most of music requires more then just selecting the ‘right’ track to support your film. Bringing a more considered approach to music is a way to elevate production.

Rather than selecting music towards the end of the edit, choosing the track early in production will effect the way you shoot and edit. Unifying the style of production and make the selected music feel like an intrinsic part of the video.

Paying attention early on to the role music has to play in your film will allow for the music to be more expressive. It doesn’t just need to be a background track. Given the space, music can say more than words can.

Music was always a key part of The Watcher. Immediately the music needed to set the scene and establish the film noir setting. From there, the music moves with the rhythm of the film, several builds bring anticipation and tension to the films big set piece moments. Fading into the background to give space to the dialogue, then taking centre stage, adding weight to big moments of cinematic action. 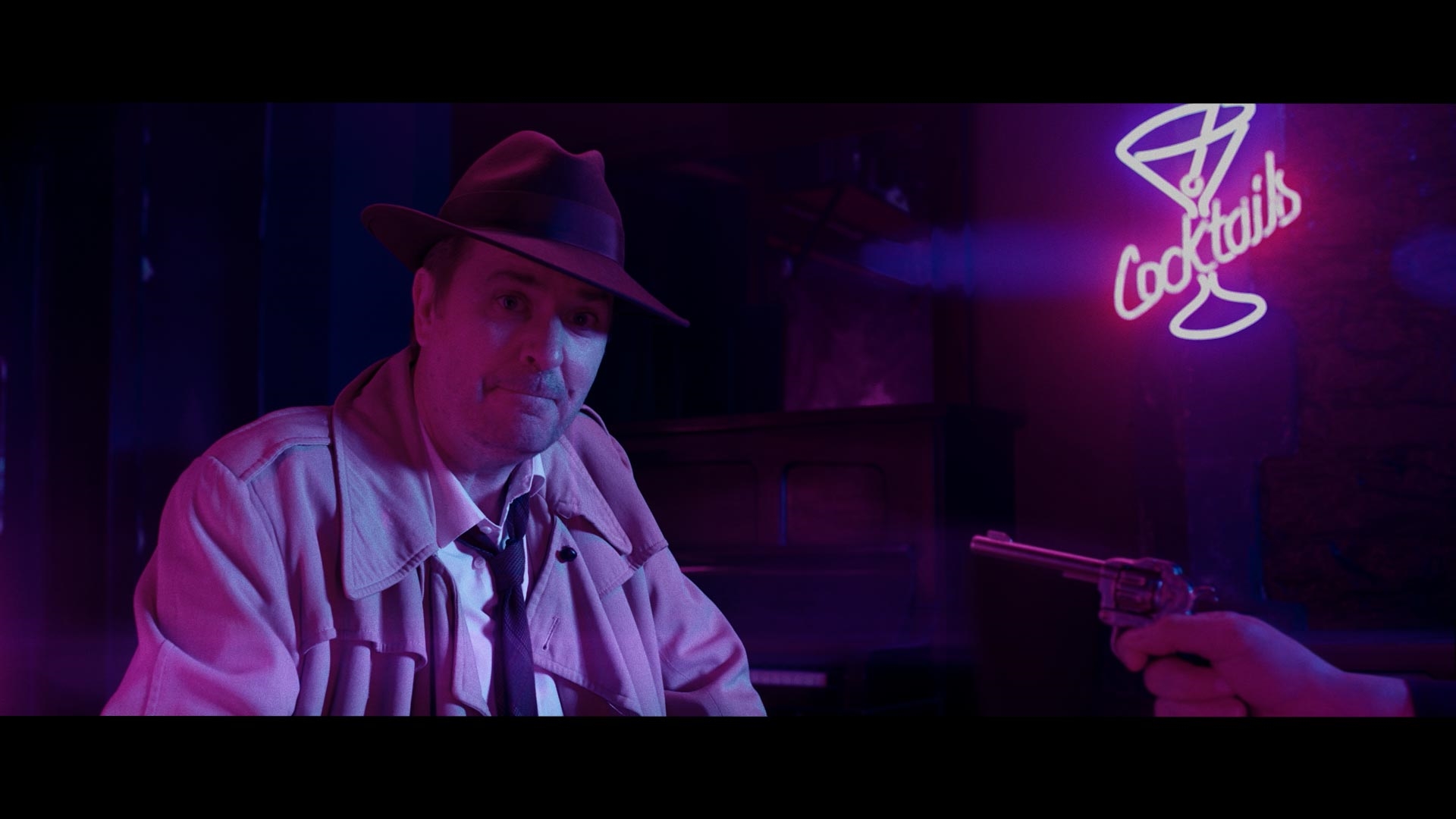 Art Department refers to the props and costume used in the film. The choice of objects that appear in your film helps to the world you create feel believable and lived in.

Art Department has an interesting partnership with colour grading. Establish a colour pallet early on with accent colours that compliment and draw the eye to the right places, and colour grading can amplify eye catching visuals.

Art department played a key role in bringing the world of The Watcher to life. After all, where would our titular detective be without the classic trench coat, slacks and trilby. 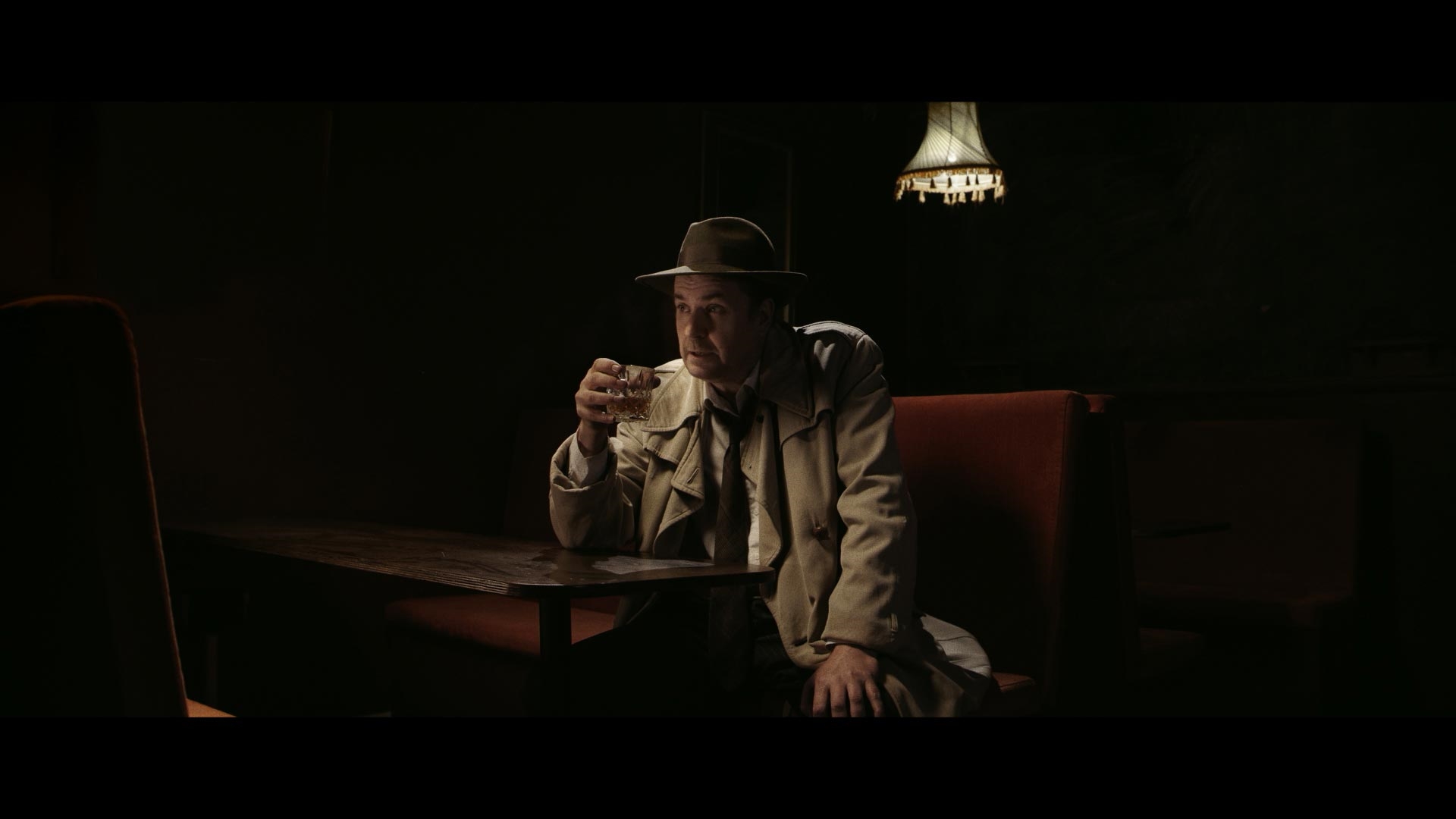 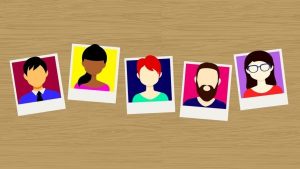 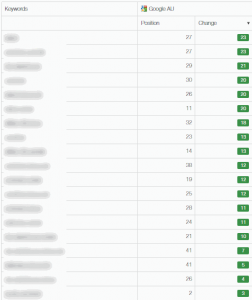 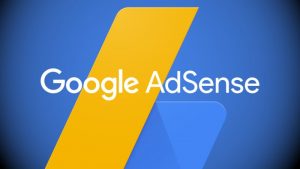 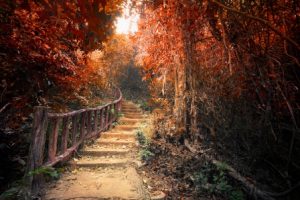